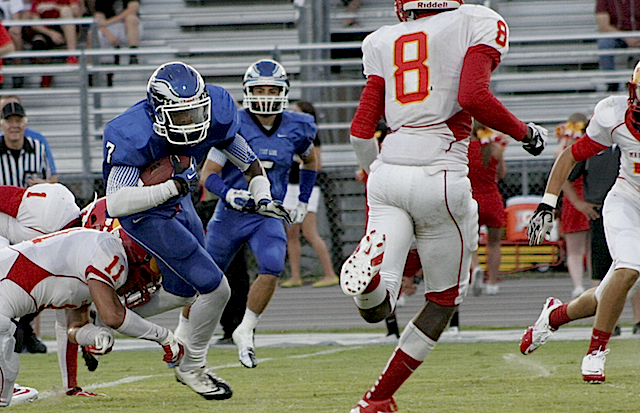 EAST LAKE
Very difficult to pick against a team that our top 2 receiver prospects play for. Together, George Campbell and Artavis Scott make up one of the best receiving combinations in the state and I would like to see how some of the national recruiting/scouting sites rank them nationally. This year, their production could drop slightly as the Eagles break in a new signal caller and Scott and Campbell continue to build that “QB/WR relationship.”

Last season Artavis Scott: Only 10 games worth of stats, the most dynamic receiver in Tampa Bay accumulated 995 yards, 10 TDs on 64 receptions.

George Campbell: Likely to be one of the most decorated prospects to exit East Lake High when that time comes. For now, he is just really good at what he does. This season, 56 tackles,1 INT and 3 FR on defense. 766 receiving yards and 9 total TDs on offense.

Campbell and Scott headline the unit, but others will provide a viable option for either Eagle QB. TE Dillon Zettwuch will be a “chain mover”

2 LAKEWOOD
Deeeep! Depth and skill, best describes Lakewood’s group of receivers. This group has been together for 2, some 3 seasons together and have developed a bond that shows on the field. Joc Ellison is the center piece surrounded by teammates who can make plays at any point. Adrian Davis, Andrew Davis, Tyrae Boykins and Darquez Watson make up the family of 5.

3 JEFFERSON
Year in and year out, you can count on the Dragons to have one of the best bunches of ball catchers around. Hard to remember a year when the Big Blue did not have a receiver amass 800+ receiving yards in a single season. This should be a big year for senior Derrick Ingram. James Wilson will surprise us all. Ventell Bryant and Chavez Pownell will be hard to cover.

4 PLANT
No super stars yet for this group. No Aikens, Charles, Winter or Gallon. But this group will be just as productive as any other Panther receiving group. Depth is also a big advantage. Plant has 7 capable players who will be in the rotation, QB Colby Brown will trust to catch his passes: Cam Winter, Fletcher Barnes, Clarke Miller, Alex Jackson, Jordan Reed, Austin Hudson and Andrew Beck.

5 FROSTPROOF
Nice when little brother can trust his big brothers to make him look good. QB Xavier Gaines will start with his twin brothers, Kaleel and Kijana Gaines to secure his passes and make plays.  Both are division 1 receivers with speed and big play ability. Major Plain is the silent one who will do damage along with Richard Cobb and Jariel Hart, Frostproof has a good group.