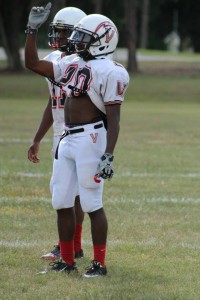 Ahhh, spring. It’s when hope springs eternal following that winter slumber and the feelings from last season–as they pertain to the gridiron–are buried and the page is turned. The weather is heating up and the players and coaches are already on the clock as the games in May are fast approaching. Spring gives us a chance to clean house and start a new and with the impact players from 2016 now gone, it’s time for an entire “new” crop of seniors and underclassmen alike to take a stranglehold on this season that lies in front of them.

We begin our whip-around coverage of the spring with Polk County. There were a ton of things that went right within the county last season for some schools while others experienced all-of-the-stress with seasons’ not going according to plan. We would list the “usual suspects” of schools that we expect to have success yet again, but that list would be pretty long considering there are several schools that will factor into the equation for the postseason spread across the classifications, but we’ll try and touch on the most-pressing issues at hand as we address the spring season.

Down at the bottom of our spring cleaning feature, you’ll find the Polk County-specific games for the spring. The usual suspects–Lakeland, Kathleen, Winter Haven–have tons of talent returning with the ability to inflict damage to opposing teams–and each other within the district–so it goes without saying you’ll hear from those teams and their prospects’ continuously. We know about the ‘Naughts and their national prospects, but Kathleen has the potential to have a special defense with guys like Ventrell Miller, Tobias Larry and Jaaron Jackson on that side. Winter Haven returns Polk County’s top passer in Will Tate plus one of the most-consitent linebackers we’ve seen this offseason in Brandon Lane.

Lake Gibson started the season frustratingly slow, but still managed to win a district championship in spite of their 0-4 beginning. They’ll return Polk County’s second-leading rusher from last season, Travell Jones who is just a rising junior while having stud Chandler Pearce along the offensive line that should provide consistency for the younger–but very talented–guys surrounding him. 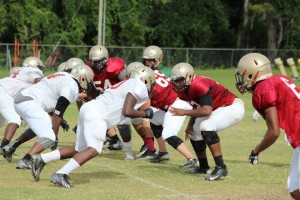 Auburndale has finished the last four seasons with records of 6-5/3-8/6-5/3-7, if that trend continues, the Bloodhounds would find themselves in the postseason following a disappointing season that carried much promise to start at the beginning. They’ve got the super-fact Chauncey Smart that’s picking up offers and they’ve got some nice pieces like Cody Bush at QB, Kyante Cobbett at LB, and a really nice TE-prospect in Keandre Jenkins to work with.

One of the teams that could prove to be a pain-in-the-you-know-what based on last seasons’ play and the return of several key components is Bartow. The Yellow Jackets stunned Lakeland during the regular season and at some point, things have to turn the corner. They’ve got LB’s Chris Jones and LJ Cummings plus CB Brandon Whitten that can make life difficult on the defensive side and if they can find ways to closeout games this fall, they’ll be dangerous. They’ll face Sebring this spring, who were in the playoffs last season as runners-up to Lake Gibson and should give the ‘Jackets a decent litmus test heading into the summer offseason.

One of the coaches’ not getting enough love in our minds is Fort Meade‘s Jamalle Cornelius. The Miners are beginning their eighth season under Cornelius and are 64-16 in that span. The past twenty seasons, they’ve made the postseason seventeen times and were district champions fifteen of those years. That’s a tradition that’s tough to beat in terms of success, and replacing Polk County’s leading rusher Tyler King won’t be easy, BUT they’ve got Stephon Fulse Jr. in the backfield who is ready to carry that load and they’ve got Cleveland Reed clearing the way for them in addition to several key pieces on the defense. 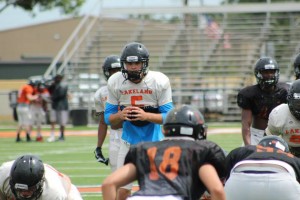 Santa Fe Catholic will look to start the process of defending their SSAC Championship after posting an 11-0 season while Frostproof is looking to erase all memory of a 2-8 season. George Jenkins is beginning their 23rd season as a program with their 10th head coach following the departure of Richard Tate–Tate finds himself back at Ridge Community–a team that’s got some pieces such as LB Kadarius Verneuil among others. Although Tenoroc did not manage to break their streak of not winning a district title, they broke another streak that probably made them just as happy. Last season, the Titans finished with their first winning season in school history and were mere seconds from the postseason. They’ve got a nice TE prospect named Garrett Steele that could make a name for himself and their game with Auburndale on the 27th of May carries some intrigue.

There will be some impact felt from the transfers–especially at Lakeland Christian as the Vikings welcome Tate Whatley and Chase Lawson from Strawberry Crest to an already very talented roster, but will have to deal with  the departure of athletic playmaker Larenz Deshazor who is now at Lakeland. Victory Christian will be looking to continue their upward trend following their state semifinals appearance in Class 2A. Leading the way on offense will be Dalton Jenner for the Storm and their jamboree with Carrollwood Day and Lake Highland Prep should serve as a nice test for them.