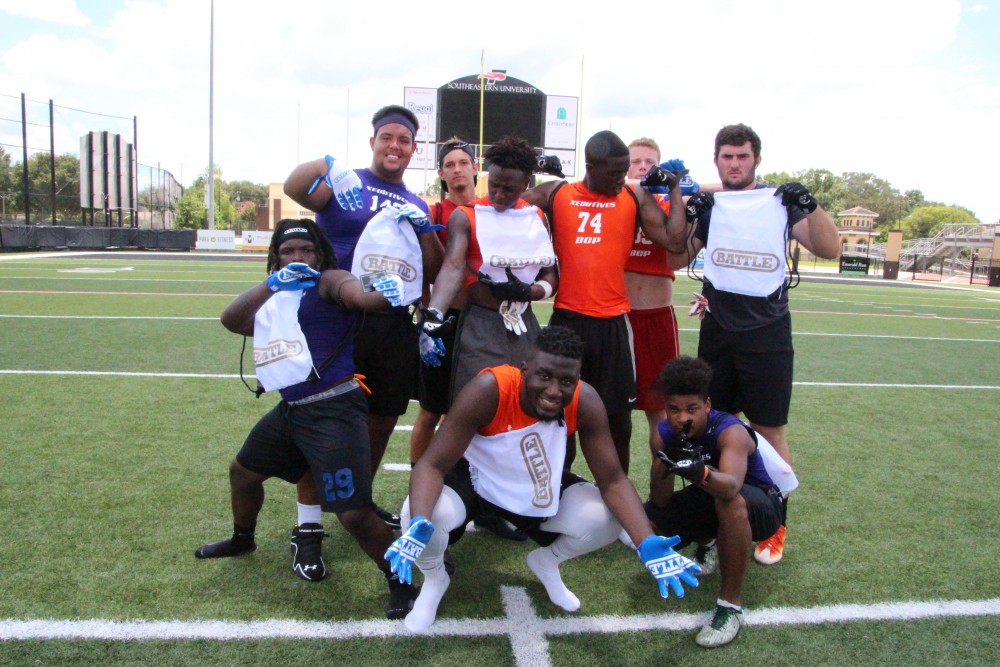 On a scorching day, mid summer in Lakeland, Florida (Southeastern University) 120 kids from across the state showed up at BCP’s Invitational Showcase…The Xecutives. Xecutives selections are earned from the three previous qualifying events Ignite, E7 Spring and E7 Summer.

This year the weather was hot and so were the performers. MVPs below just edged out their peers to take home a few gifts from Battle Sports. Pro Day/NFL combine position drills, Individual position work, competitive 1 on 1 drills and 7 on 7…packed day of action for the kids who all performed well.

Gavin Denboer, Alonso 2018 QB – Gavin has been steady each camp. Performing well over and over again. This time around it was a few throws during 7 on 7 which put him over the top. We expect Xecutives QBs to operate the offense, make sound judgments and crips throws. This is what Gavin displayed yesterday. He also showed good footwork, excellent vision and ball placement.

Rafael Smith, Sebring 2018 RB – Burst, elusiveness and ability to catch the football as a passing threat. All key attributes we expect to see from Xecutives MVPs. Rafael Smith showed them all yesterday. The ability to have that extra gear, burst, ability to pull away from defenders. Smith made defenders miss in the open field tackle drill and when he caught the ball in 7 on 7.

Austin Eldridge, Plant City 2018 TE – What we like most about Eldridge, he can uncover from the backer. He can create separation and becomes a big target for the quarterback. Very controlled route runner and understands how to find the windows in zone coverages. Not bad releasing off the line of scrimmage in 2-points stance or in a traditional 3-points stance. He is a physical player, but nimble at the same time. We like the way he tracks the football while in the air for a big man.

Donovan Jennings, Gaither 2018 OL – One of the most athletic linemen in the area. Donovan started the day a little sluggish, but really ended strong. Because he is so athletic, he is able to mirror defenders in pass pro, can redirect in the run game and hits on the rise. We love the punch in his short set and nimbleness during is kick and slide. Rarely over extends where his body is not within the frame. Can show a mean streak. However, will rely more on his athleticism more than his attitude.

Joe Hodge, Tampa Catholic 2020 WR – The smaller the package, the bigger “bang” it may have. The package in this case was Joe Hodge. So sweet in his route running with great body control and crisp transition. Caught the ball extremely well. Great concentration with speed and ability to get deep. Elusive in the open field and so dangerous with creating separation with the defender.

Tre Huntley, Lakeland 2019 DL – If we could rewind the time…We can’t. But we can go back and watch film form Tre Huntley in January at our first camp of the season, Ignite…The improvement would be so simple to see. He has improved with his ability to redirect in space, violent when changing directions. We don’t allow defensive linemen to bullrush the offensive linemen during 1 on 1s, but Tre has a really good speed rush and rip, while turing the corner to get to the passer. Good first step, “second effort” type player and surprisingly stout at the point of attack.

Jon’trey Hunter, Sickles 2018 S – Super athletic. Could make an argument that Mr. Hunter was the most athletic player on the field yesterday. Showed out in 7 on 7. The argument for MVP was close until 7 on 7 came and Hunter became super disruptive. Love his short area burst and deep range. Has this second gear when he needs to recover. Love the way he flips his hips. His vertical explosiveness is outstanding.

Tim’arcus, Simpson, Sickles 2018 CB – Attractive corners have to be able to play press man. Simpson stand 5-11/175 pounds and at times is as good as any corner in the area in press coverage. Good plant and drive, good feel for angles and good zone awareness. Was disruptive in 7 on 7 and not scared to take chances. More quick than fast. Good transition and performed with confidence yesterday.