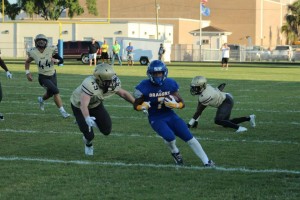 It’s time to crank up the jams on our spring playlists as all of the Hillsborough County schools plus a few Polk County schools will participate in jamborees either this week or next. There are ten jamborees in total, and we give you a couple of thoughts and/or burning questions as the teams prep for their contests. Although it’s a little difficult to find all the answers fro just a half of play, we can still look forward to finding out “some” answer nonetheless.

Armwood/Strawberry Crest/Tampa Bay Tech at Plant City
Looks like the Hawks are yet again reloading with talent and are on-track to be the cream-of-the-crop in Hillsborough County while ‘Crest begins new life with their new Head Coach, Ronnie Hawn. The Titans are reloading and will have potentially one of the best QB-WR tandems in the state–let alone the area–if Michael Penix Jr. and Daquon Green get cranked up and those two are far from the only significant talent on TBT’s roster. The Raiders are coming off their deepest run in school history and return quite a few starters making this “jam” one of the workout playlist for certain.

Bloomingdale/Durant/Newsome at Brandon
The Bulls are coming off a disappointing season to say the least, but have talent and quite a bit of optimism with their new Head Coach, Max Warner heading into the spring. The Wolves are always competitive and play a brand of football that consistently showcases some road graders in the trenches and hard-nosed skill players to boot. Durant has the potential to be one of the most-improved teams in the area even after posting a 6-4 season. The hosts Brandon are coming off a very successful season in 2015 and have the potential to be really good in 2016 proving last year wasn’t a fluke by any means.

Chamberlain/Leto/Middleton at Blake
Is this the season that one of those four teams exceed–or in some cases, meet–their expectations? Although it would be naive to say that they all will turn it around from last season, we wouldn’t be naive to think that the talent that is walking the halls on these campuses is enough to field better than what they’ve produced in recent past. Matt Kitchie at Leto has done a fantastic job generating excitement and is getting numbers while the Chiefs don’t lack for talent at certain spots. Middleton and Blake always have one or two names that deliver during the season, so don’t just shuffle this jam down the playlist.

Hillsborough, Freedom, Wharton at King
Two of the four schools (Freedom and King) will be featuring new head coaches, while Hillsborough and Wharton return teams that will be factors for the postseason. We know the Terriers are with depth at the skill positions that they haven’t had in a very long time, while the Wildcats look on paper to be right back in the are of their 8-2 record–but as they say, that’s why the games are played on the field, not paper. 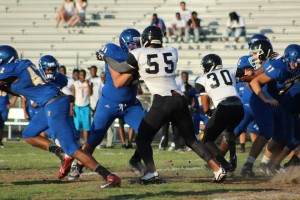 Riverview reached their highest win total since 2009 last season albeit with just three wins, while Spoto was a 2-8 team in 2015 after a very successful 8-4 season in 2014. East Bay and Lennard won six and seven games respectively and bring back rosters that will have them once again factoring into their district races once it’s all-said-and-done.

Gaither, Sickles, Steinbrenner at Alonso
The hosts are excited about their team that aside from a few unlucky breaks were much better than their record indicated last season at 4-6. Sickles begins the season with a new head coach while Gaither has a chance to showcase their defense–which should be pretty stout. Steinbrenner has depth at their QB position and should be just as competitive as they were last season posting a school-record 8-2 campaign in 2015.

Jefferson, Robinson at Plant
Blink you might miss some of the plays between these three schools with some of the fastest skill players in all of Hillsborough County taking the field at Dad’s Stadium this Thursday. Jefferson and Plant have size to go with that speed as well and Robinson–while the least-expereinced of the three–is in possession of talent that’s ready to make a name for itself.

Carrollwood Day School, Lake Highland Prep at Victory Christian
There’s a ton of excitement taking place on campus at CDS with a new gymnasium being christened as well as some talent returning for Coach Lane McLaughlin and his staff. They’ll be facing a Lake Highland Prep team that returns virtually every starter on a squad that went 6-4 last season while Victory Christian will look to build around Dalton Jenner and the momentum they had after finishing in the Class 2A State Semifinals in spite of starting the year 0-4.

Lake Region, Ridge Community at Kathleen
The hosts have one of Polk’s best defenses, but will have to make sure their offense comes around accordingly in order to complete the job. Lake Region won their first two games of the season before dropping eight consecutive games and want to forget all about 2015 while Ridge Community has plenty of talent–and confidence–to make a serious run in Class 8A at the postseason.

Apopka, Lake Gibson at Kissimmee-Osceola
The Braves couldn’t have scheduled a tougher test–even if it’s two quarters per opponent. Lake Gibson has plenty of young talent on their team, and their offensive line–the biggest question mark thus far–will have its hands full with the Blue Darters and Kowboys defensive fronts. Both Apopka and Osceola are returning large chunks of their rosters that went deep into the playoffs with Osecola making it to the 8A title game versus Flanagan.