Playoffs?!? We’re talking about PLAYOFFS?!? Yes. Yes, we are. Jim Mora Sr.’s words are truly timeless whenever the topic of playoffs comes up, and although in slightly different context than what we’re about to dive into, the tone in which he delivered that line of questioning back in the day is even more appropriate when you consider that we are talking about the 2017 postseason–before the 2016 spring season has even concluded. Brining up the postseason–for high school football nonetheless–that’s going to take place some 19 months from now generally creates the same sort of confusion that Mora Sr. displayed when answering his own question, but there’s good reason. 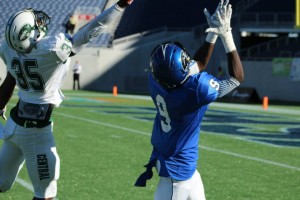 On Friday afternoon while many of us had visions of happy hour and sunsets on the brain as the work week came to a conclusion, the FHSAA poured an extra shot of adrenaline into our cups that were starting to runneth over with contention with the current structure of the postseason. While the FHSAA’s Powerpoint served was merely an appetizer to the meeting on June 14th up in Gainesville that will act as the main course to approve or disapprove of the suggestions, they gave us the entire weekend to digest what was offered. The initial reaction from throughout the state–especially in some coaching circles–seems to be pretty positive towards what they’ve cooked up in the kitchen thus far.

So what changes has the FHSAA proposed? Although it is pretty clear that some tweaks will have to be made to the initial proposals, there’s going to be sweeping changes made to the playoff structure in this state as early as 2017 that we haven’t seen since the 60’s and early 70’s. This is just the tip of the iceberg in our breakdown of the new system that has been proposed, but let us take you some of the highlights of the changes that have been suggested.

The biggest changes coming will be in the form of abandoning districts as they stand. This paves the way for teams to stop the complaining (and rightfully so at times) about the 3-team districts that often get sub-par teams into the postseason juxtaposed with schools that were locked in insanely difficult districts that can now earn their way into the playoffs. Schools like Blanche Ely (2-8) and Nova (5-5) wouldn’t be in the equation any longer. Nova actually went as a district champ over West Broward–who finished at 7-3 this past season. Under the new format, West Broward’s 7-3 record would be viewed as the better season regardless of district standings.

Dropping districts would open the doors wide open for local conferences to be created allowing teams within a close radius of varying classes to play each other. The reason this is an important change is because week eleven can suddenly become a very important week with “conference championships” acting as the big game in the final week and an opportunity for teams to increase their playoff points’ totals. The FHSAA has even called for a week eleven press conference to announce the playoff seedings a la March Madness in November. 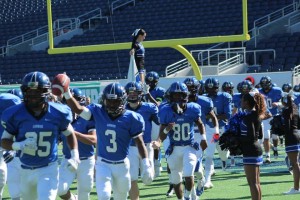 Classifications and regions will remain the same. There will be eight classifications and four regions within those classes. What’s interesting to note from the presentation was that schools will no longer be allowed to change their classifications based on travel restrictions or any other issues that they can can claim now preventing them from keeping their initial assignments from the FHSAA. Simply put, you play in the class that the FHSAA assigns you. The travel and schedules will be totally up to the schools and districts themselves.

We mentioned points and seedings. The new system is based in-large part on the one that is currently used in Nebraska. The way points will be rewarded is based on four categories using the record from the previous year as the sample size. For example in Category 1, if team ‘X’ schedules team ‘Y” and team ‘Y’ has won better than 80-percent of their games the previous season, if team ‘X’ wins, they receive 50 points for a victory and 35 points for a loss. In Category 2, a team that defeats a team with a previous year record of 60-percent or better (records of 7-3/6-4/7-2/6-3) then they will receive 45 points for a win and 30 points for a loss.

The idea of seeding teams is direct result of the districts no longer being needed. Simply put, the eight teams in each region with the highest number of points will be seeded accordingly. The FHSAA’s Powerpoint included Class 7A Region 1 as the example. Columbia at 9-1 would’ve been the #1-seed, with Gainesville-Bucholz (9-1) being the #2-seed by virtue of Columbia winning an early season head-to-head match-up out-of-district. The #3-seed would’ve been Bartram Trail at 7-3 with Edgewater at the #4-seed with the same record, but just shy on points. Oakleaf–who didn’t even make the playoffs because they lost to Bucholz and Bartram Trail in-district–would be your #5-seed with an 8-2 record by virtue of their quality wins during the rest of the season. Hagerty finished as the #6-seed at 7-3, Lee High School would’ve been the #7-see with a 7-3 record and Lincoln would have been the #8-seed.

What’s interesting of note with Lincoln is that they finished they regular season with a 4-6 record, but had teams like Camden County, Niceville, Manatee, Columbia, Orange City University (8-2), Godby and Trinity Christian on their schedule earning them more points for losses than what they would have earned for wins against schools within their city in some cases. Locally, one of the biggest examples of a team worthy of the postseason that would’ve actually made it would have been Wharton if this scenario were to be approved. The Wildcats finished 8-2, but were in one of the toughest districts to crack the top-two in the entire region.

There’s also the proposal of bonus points being awarded for playing against teams stepping up in weight class. What has been proposed is that a team that plays against another team one class higher, will be award one bonus point. A team playing two classes higher will be awarded two points–capping the number at four. The point of contention here is that the highest classification schools have very little incentive to play anyone other than 8A schools under the bonus. The FHSAA has already conceded this is going to be tweaked with additional incentives such as beating a reigning state champion earning them bonus points or perhaps using a five-year sample size to determine teams that have won better than 80-percent that would encourage teams in 8A to schedule a Miami Central or Armwood.

The FHSAA strongly suggests that all coaches and administrators attend the meeting at their Headquarters in Gainesville on June 14th if you want to have your say in the mater that is expected to be voted on by the Board of Directors at the conclusion of the meeting. Big County Preps is one of those that will certainly be present when this takes place and will keep you posted on all things coming from Gainesville regarding the changes.