Week Three has come upon us, and it’s time for a full slate of football. Tonight, it looks like nothing will disrupt our full slate of games, but hey, I’m not the weatherman. We’ve got all of the things you like: games to watch, questions to be answered, players to pay attention to, and that one crazy stat that you’re going to want to tell all of your friends at the water cooler today. Here’s just about everything you need to know about the third week of our season.

Four games you need to keep an eye on: 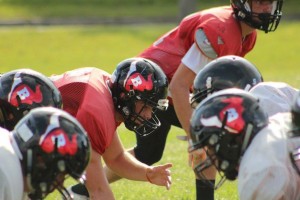 Will the Bulls grab a 3-0 record? It’s unlikely, especially with a rested Armwood from a scheduled bye week, but they’ve certainly got a chance. Armwood defeated Plant City two weeks ago, but only by 20. Are the Hawks losing their edge? They’ll look to show just how good they are against a defense that hasn’t exactly been tested yet. Max Warner’s group will have to execute to perfection in order to have a shot at beating the Hawks in their nest.

It seems like almost every week, Northside Christian is a team to watch. They certainly haven’t disappointed over the first two wins against First Baptist Academy and Calvary Christian, but Victory Christian may be a different animal. The Storm are coming into this game rested, and their only game came against Pasco, where they won 28-19. It’ll be a long drive for the Mustangs, but if they come out with a win, we will be really able to gauge just what kind of team they are.

The Battle for the South Tampa Cup. This rivalry goes very far back, and it’s going to be renewed this week. Both teams are coming in rested thanks to Hurricane Hermine, and both teams have something to prove. Plant defeated Bryant (AL) in Week One, Robinson is looking to bounce back after they lost to Blake, and both teams are trying to win the silverware in this matchup. Look for the Panthers to share what they’ve got with a more local audience this time around.

Bishop McLaughlin has been lights-out since the beginning of the season. They haven’t given up a point in fall football since November of 2015. They’ve pitched three straight shutouts, and they’ve done some incredible things. Watch for the Hurricanes to have a tough time with the Eagles – they went 7-2 last year, and they’re currently 2-0 on the year. With the long drive from Gainesville, Bishop McLaughlin has the home-field advantage, and that may be the one difference between winning and losing.

Three questions that we still have yet to see an answer:

What is Wiregrass Ranch’s potential? I think we’re going to see a big answer to that question tonight, depending on how they play against Sunlake. It’s a major test. But, remember, the Bulls laid the hammer on a Zephyrhills team that beat the Seahawks last week. This is going to be a great time to see just how they can compete with their in-county teams before they take their talent to district play.

What can we expect from Armwood and Manatee?

The two played each other in the Kickoff Classic – the Hurricanes came out on top, but since, I’m wondering, are these two teams really the best in the Bay Area? Mentioned before, Armwood didn’t defeat Plant City by as much of a margin as they did last year (but that could also mean a better PC team), and Manatee only got away from Palmetto by four. The Hurricanes have officially scored 31.5 PPG so far, but 56 of those came in a loss. Manatee’s test against Venice will have an impact on what we’ll see from them for the rest of the season.

Okay, okay, I’m saying this while the Indians haven’t played a single district game, but they’ve played well during these first two weeks. However, they played Freedom and Brandon. But then again, it all depends on their running game. It has to remain to be consistent in order for the Indians to have success. They’ve got their rivalry game against Riverview this evening, so watch for the Indians to make a statement to the Sharks and the rest of 7A-9.

Two players to watch out for: 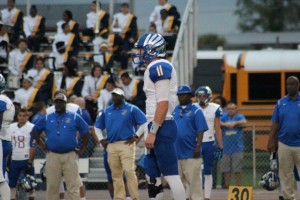 The Dragons play Sickles tonight, and what I’m curious to see is just how much success that Weldon will have against the Gryphons defense. Weldon was 12 for 30 against Tampa Bay Tech with two interceptions two weeks ago, so he needs to be able to make a big statement tonight against the Sickles secondary of Anthony Quintana, Tim’arcus Simpson, Jontray Hunter, and a host of other quality guys.

Now the Crusaders game won’t happen until tomorrow, but we’ve talked about the kind of response Barrett needs to have after Jesuit’s Malik Davis had a couple great performances in the first two weeks of the season (Kickoff Classic and Week One). Now it’s flipped to Barrett. What will he do in his first full football game of the season against a team that is a thousand miles away. Watch for Barrett to play with a chip on his shoulder, with something to prove on Saturday night.

43 – Coming into Palm Harbor University’s bye week, that’s how many average points they’ve scored a game. They put 51 on Mitchell in the Kickoff Classic, and they put 35 on East Lake in the Week One loss. Watch for PHU to make a big statement when they face Newsome in Week Four.