The NFL Draft has come-and-gone, but the excitement lives on as the Sunshine State was the star-of-the-show, especially on Thursday night, during the opening round. Overall, there were 7 players drafted who claimed Florida as their home, giving the state 26 players taken in the first round over the past five seasons–22 of those the last three seasons.

Last year’s draft had the City of Tampa front-and-center with two players taken in the first round–Dante Fowler and Nelson Agholor–with those two a part of an amazing nine guys from the area that were taken not counting the Undrafted Free Agent’s (UDFA’s). Well, Tampa kept its streak alive with Wharton’s Vernon Hargreaves III taken by the hometown Bucs with the eleventh-pick. Hargreaves joins eleven players from the area–four that were drafted and another ten taken as UDFA’s in this years’ class.

Hargreaves III was destined to become one of Tampa’s most-decorated players from the time we saw him take the field as a freshmen at Wharton. Following his career for the Wildcats, he went on to Gainesville to become one of the conference’s most-effective players on the defensive side and he’s got the numbers to prove it. Hargreaves III was a Consensus All-American his 2015 season for the Gators, finishing his career with 121 tackles, 10 interceptions and 27 passes defensed–which was good enough to earn Vernon second on the SEC’s career PD’s list since 2005 and was fourth in the conference in interceptions and yardage on INT’s for his career. 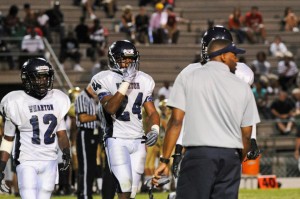 His numbers at Wharton were insanely impressive after finishing his career in New Tampa with 1,153 all-purpose yards and 14 touchdowns of offense paired with 203 tackles, 3.5 sacks, 9 interceptions, 24 passes defensed, 5 caused fumbles, 2 blocked punts and 3 blocked field goals.

Jefferson’s Chris Moore is one of two Dragons to find a place at the next level after being taken by the Baltimore Ravens in the fourth round with 107th-pick. Moore was a part of one of the most-prolific offenses in high school history at Jefferson finishing with 2,279 yards and 26 touchdowns in just two seasons and won a state championship in the process. At the University of Cincinnati, Moore was just as impressive finishing his career with the Bearcats with 2,301 yards and 26 touchdowns and helped UC finish sixth in the nation in total passing.

East Lake’s Tyler Higbee was taken in the fourth round just three spots after Moore with the 110th-pick of the Los Angeles Rams. Higbee’s numbers at Western Kentucky over four seasons were good enough to earn him the distinction of being the highest draft pick in the history of the program. Higbee caught 38 passes his senior season good for 563 yards and 8 touchdowns as a tight end and finished with 1,054 yards on 68 receptions and 14 touchdowns. At East Lake, Higbee finished his career with 1,118 yards and 12 touchdowns on 83 receptions for the Eagles.

Hillsborough’s Anthony Brown–one of the fastest players to come from the area as well–was drafted by the Dallas Cowboys in the sixth round with 189th-pick from Purdue as cornerback. Brown is one of two Boilermakers from the area to land a spot over the weekend joining Robinson’s Frankie Williams. Brown finished his career with the Terriers with 1,217 all-purpose yards, 94 tackles, 3 interceptions and 4 passes defensed. Fast forward to his time in West Lafayette, and Brown finished his career with 189 tackles, 1.5 sacks, 4 interceptions and 19 passes defensed. Those 4 INT’s were good enough for third overall this season in the Big Ten Conference.

Speaking of Frankie Williams, the Robinson and now former Purdue cornerback leads our list of the UDFA’s following his pick-up from the Bengals. Williams finished his career in Port Tampa with an insane 227 tackles, 10 interceptions and 17 passes defensed for the Knights and continued that kind of production at the next level posting 128 tackles for his career for the Boilermakers.

Jefferson’s Tyriq McCord joins Chris Moore from that magical 2010 state championship squad following his acquisition by the Steelers. McCord finished his time at Miami with 95 tackles, 3 interceptions, 5 passes defensed and 5 forced fumbles for the ‘Canes following a stellar career for the Dragons with 182 tackles, 34.5 sacks and 31 QB hurries among other numbers.

Armwood’s Eric Striker found himself a media-darling following his impassioned speech that spread throughout social media after he learned he wouldn’t be drafted–one that made Head Coach Rex Ryan pickup the phone immediately and get him to Buffalo as an UDFA. Striker finished his career at Oklahoma with 191 tackles, 22.5 sacks, 11 passes defensed and his 18 tackles-for-loss this past season was good enough to lead the Big-12. Striker was a legend here before heading to Norman though, posting 323 tackles during his time in Seffner along with 51 tfl’s and 38 sacks.

Spoto’s Geronimo Allison finds himself as a potential future recipient of passes from Aaron Rodgers in Green Bay following his signing to an UDFA contract on Sunday. Allison was eighth overall this season in reception yardage at the University of Illinois and was good for 1,480 yards on 106 receptions during his time in Champaign-Urbana. Plant’s Phillip Ely is going to get a look from the hometown Bucs following his career at Toldeo. Ely started his career in Tuscaloosa, but finished very storing for the Rockets his final years and had an amazing senior season finishing with nearly 3,000 yards passing and 23 touchdowns for the Rockets.

Joining VH3 from the University of Florida is Southeast’s Brian Poole. The cornerback was second in the SEC in INT’s in 2014 and finished his career with the Gators with 120 tackles, six interceptions and 7 forced fumbles and could possibly be facing his former teammate in the NFC South with regularity as a member of the Atlanta Falcons.

Next on the list is Frostproof’s Demetrius Cherry, who is by way of Arizona State–by way of military school then JUCO. Cherry is a huge defensive tackle at 6-6/300+ pounds and has been brought to camp by the San Francisco 49ers. He totaled 91 tackles, 4 sacks and 7 hurries is senior season for the Bulldogs and then finished his brief stint at Arizona State this past season with 38 tackles, 1.5 sacks, 3 passes defensed and 3 forced fumbles.

Cherry is joined this year by three more players from Polk County. Lake Wales’ Rolan Milligan from Toledo–who was signed by Dallas, Kathleen’s Gionni Paul from Utah who was signed by the Bengals and Lake Region’s Thor Jozwiak from USF that has landed a spot in camp with the Buccaneers.