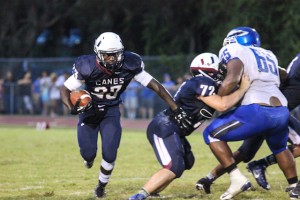 PALM HARBOR – The Hurricanes figured they would do us a favor and let Tropical Storm Erika fizzle-out so they could show everyone what a storm looks like in the football field without the actual property loss and destruction. The ‘Canes ended East Lake’s 25-game regular season winning streak and sent shockwaves throughout north county and beyond its borders with a 14-10 victory, driving 99 yards on 23 plays to do it.

We caught up with PHU’s Head Coach Reggie Crume while he was on campus Monday and asked him about the experience and what lies ahead. With a ton of momentum heading into week two against Seminole, and a ton of credit dished out to his defensive staff and new-DC Jimmy Costalas–Crume is ready to face the next challenge that faces he and his program; regardless of the wins and losses.

Crume knows that it’s only week one, and just because they defeated the big dogs on the block does it mean that it’s time to pack up and call the season a success is it? “I told my team I’m nervous for this week (in a good way, of course)–because we are gonna find out just how good we are THIS weekend.” said Crume. “If we don’t have a good week of practice and don’t go out and execute–then we are suffering from the hangover from last week. I plan on finding out a lot about my team this week.”

The natural reaction once they hit the locker room–was probably one of disbelief to be honest, and to Crume’s own admission he didn’t even realize the final drive was 99 yards and that it took 23 plays. All that mattered to him was staying focused and how his vision for his teams’ success could take fold.

“It was just funny how everything played out in the game. I like to visualize how things should go beforehand and beating a great team and a great coaching staff like East Lake’s–when I play it out in my head–it panned out how I envisioned it following the talk I had with my team and the instructions we gave them. I just kept telling them that, let’s put ourselves in a position at the end of the first quarter. Let’s put ourselves in a position to succeed. When I go back and look at their tape, teams come out against East Lake and make early mistakes and they (East Lake) do a great job of capitalizing on those mistakes.”

Did it work? Well Crume knew that whatever the vision he had for his team, that regardless of the physical aspect, his team would have to be mentally tough above all.

“So I challenged our team to be mentally focused from the start of the game,” Crume said. “To not create any unforced errors and just put ourselves into position where they have to earn everything they get and we just don’t hand it to them. We were 7-7 at the half and our kids did exactly what we challenged them to do. It’s just crazy that the vision I had for beating East Lake just happened to work out that way.”

The obvious thing that people didn’t see in the box score–envisioning success is one thing if you’re the coach that’s in the trenches with these young men day-in and day-out. But what about those of us that couldn’t attend the game? What happened in the game that wasn’t reported or isn’t possible to convey by the box score alone? Crume stopped for a second and compiled three quick things that he felt were the biggest takeaways without the presence just stats.

“Obviously it was the way we were able to grind it out with such a physical team like East Lake. Our guys did not back down. I think in a lot of situations we frustrated them and had them bogged down. They had some uncharacteristic personal foul penalties which is isn’t in their nature so I think for the people that weren’t at the game just need to understand that our kids were resilient and didn’t back down. East Lake also had the ball inside our 5-yard line twice and came away with zero points. The last thing, we had terrible field position all night, but we ended up with over 300 yards of offense even though we came way with just 14 points. East Lake did a great job limiting what we did as well.”

Was there a secret ingredient to the success? Is there some recipe that all of us don’t know about regarding the Eagles? Gone are the George Campbell’s, the Artavis Scott’s, the Mason Cole’s and the indelible leaders like Jake Hudson and so on.

“Sometimes ignorance is gold–we’ve got 33 guys from last year’s JV team that’s on the roster now and that will be returning next season. We started two freshman on defense last Friday and so all these kids just don’t know any better which cuts down on the intimidation factor that’s a big part of East Lake’s approach and justifiably so I might add. East Lake comes into every game with a “they can beat anybody” mentality so we’ve got to match that along with other teams. It’s an approach that has worked for them and we’ve got to adopt that mentality. This group of kids that was on JV last season enjoyed success against the kids on East Lake’s roster that were on JV, too.”

So, what’s the mantra now that you’ve seen flashes of talent and mental resiliency Coach Crume?

“Finish–finish together and leave no doubt.”