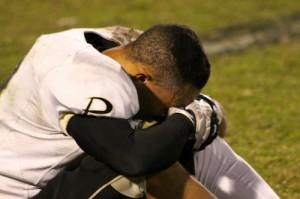 Once again, Plant’s season came to an end in Orlando — but for the defending 8A State Champions, the end came three weeks too soon this year as Plant fell to Orlando Dr. Phillips 24 – 7 in a regional semifinal game Friday night.

For the Panthers, it was one of those nights . . . one of those nights where nothing seemed to work. The Panther offense never got on track; the running game that had been so effective for the Panthers sputtered and the passing game was hit and miss — either senior quarterback Aaron Bank was getting hit or his pass missed the mark. Banks, playing in his final game, finished the night 7 for 22, but more than once, an on-target pass fell through the hands of a receiver turning up field before securing the ball. Banks was sacked 6 times and pressured several more. Give credit to the Dr. Phillips defense. After giving up over 300 yards passing in a win against Wharton the week before, they found a way to hold Plant to under half that in total yards. It was just one of those nights for Plant.

The night began with promise. Banks hit fellow senior Tristan Cooper with a 32-yard pass on Plant’s first play from scrimmage to move the ball into Dr. Phillip’s territory. But, three plays later, Banks’ pass was picked off. Dr. Phillips was unable to move the ball and a short punt gave Plant the ball at its own 35 yard line. Senior running back Wesley Bullock began the possession with a 17-yard run, but the drive stalled and Plant was forced to punt. The Plant defense forced its second three-and-out and got the ball back again. This time, however, the drive went nowhere and Plant punted again.

Dr. Phillips hit on back-to-back plays of 25 yards or more to move the ball deep into Plant territory as the first quarter came to an end. This time the drive paid dividends when Eric Harrell found the end zone on a 4-yard run to give the home team a 7 – 0 lead. The ensuing possession went backwards for Plant, forcing a punt that did the same thing, rolling dead at the Plant 32 yard line. The Plant defense bowed up and held Dr. Phillips on a fourth and short.

The Plant offense then showed signs of life. On third and long, sophomore Patrick Brooks cut back against the grain and sprinted 30 yards to midfield. Banks then hit senior John Rutledge III on a slant across the middle and Rutledge was able to hold onto the ball despite a crushing blow from the defensive back. The big hit seemed to energize the Plant team and the crowd, but the positive energy could not be converted into positive yards and Plant was forced to punt again. With time running down in the first half, the Plant defense forced one more three-and-out. Senior Paris Bostick returned a long punt to midfield, where Banks began the drive with a 9-yard completion to junior Cam Winter. But, a sack and a incompletion of 4th down gave Dr. Phillips the chance to take a knee on the final play of the first half and take a 7 – 0 lead into the locker room.

Standing in line for hot chocolate on the chilly night at halftime, one had the feeling that Plant had Dr. Phillips right where they wanted them. A team known for making halftime adjustments was down only 7 points with a half left to play. The optimism increased at the start of the second half when Dr. Phillips could only muster 4 yards on its opening drive of the second half. Banks began the Plant drive with a 12-yard run and the Plant faithful sensed that the corner had been turned and that the second half and the game, would belong to the Panthers from South Tampa. But a short loss and two incomplete passes forced another punt deep into Dr. Phillips territory.

The Plant defense forced what appeared to be another three-and-out, but a nice acting job from the Dr. Phillip’s punter drew a flag for a phantom roughing the kicker call, giving the home team 15 yards and a new set of downs. The Plant defense came up big once again, stuffing their opponents for a loss on fake punt attempt four plays later. Still only down a touchdown, Plant now had the ball in Dr. Phillips territory. Incomplete passes, a holding call on a pass that was complete and a quarterback draw for a loss of yardage forced a short punt that was downed inside the Dr. Phillips ten yard line. The play of the game came three plays later when quarterback Alton Meeks (who lost to Plant last year in the playoffs when he played for Orlando Boone before transferring over the summer) hit Rodrick Proctor with a short out. Proctor was able to break a tackle, stay in bounds and outrace the Plant defense on an 85-yard touchdown pass to give Dr. Phillips a 14 – 0 lead.

The teams traded punts and as the fourth quarter began, Banks, scrambling on a big fourth down play, lost his footing cutting back and Plant turned the ball over on downs on its own end of the field. Dr. Phillips took advantage of the good field position. Another pass from Meeks to Proctor, this one for 38 yards, set up a 7-yard gash up the middle by Harrell, his second touchdown on the night, and the hosts were up 21 – 0. Harrell finished the night with 85 yards on 20 carries.

Plant responded immediately on the ensuring kickoff when Bullock returned the kick 91 yards for a touchdown to close the gap to 21 – 7. Plant then recovered the onside kick, but after a lengthy discussion, Dr. Phillips inexplicably was awarded possession. Harrell ran for 25 yards and Meeks connected with Proctor for 24 more yards, setting up a 23 yard field goal.

Subsequent Plant drives were thwarted by penalties, incompletions and plays that simply did not work. It was just that kind of night for Plant.

Over the last few years, Plant has known for sure when its last game of the season would be played. The reality that this was the final game of their high school career immediately hit home for many of the Plant seniors. Tears fell onto the cold, wet grass and teammates and coaches consoled a class that was unaccustomed to bowing out of the playoffs before the championship game was played. But, for Plant, it was just that kind of night.