The Marauders are back on track for deep postseason run, but first they’ve got some other business to attend in order to finish up the regular season. Clearwater Central Catholic has an underclassmen playing at virtually every position, yet they sit in a great position to finish this season undefeated and get another great chance at getting to Orlando in December. 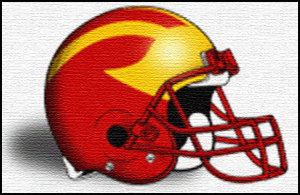 Team defense is obviously an important factor in their success, and CCC has allowed 9 points or less in five of their seven games this season including two shutouts. They’ve also received balanced production from three different running backs allowing the Marauders Staff to be confident in either way they attack defenses. One of those underclassmen that’s making huge strides on offense however, is their QB Jakob Parks.

The 6-foot-3, 195-pound junior has been a model of efficiency for CCC in 2015, completing 65% of his passes for over 1,000 yards. Parks has only attempted more than 20 passes in a game once this season, but most importantly, he has thrown just one interception while accounting for ten touchdowns since taking control of the reigns from Jeff Smith, who is now at Boston College.

Although we would could go on, who better than Head Coach John Davis to give us the scoop on Jakob’s development in his own words? Coach Davis was gracious enough to share with us his opinion on where Jakob stands this season and what his future potentially holds.

“Jacob Parks has been outstanding this year, but I don’t consider it a surprise. I felt he made some serious strides of improvement last year backing up Jeff Smith. He continues to improve each week and takes playing quarterback very seriously. He works hard on his fundamentals and is becoming more aware of when his fundamentals break down, usually a poorer throw results. Jacob is a very smart player. He studies film and knows the weaknesses of paticular coverages. He knows where his progressions are and he’s not afraid to take a check down throw. I am receiving Division 1 inquiries about him and if he continues his work ethic the sky is the limit for him.”