WEEKI WACHEE – The Hornets enjoyed their best season as a program in 2015–albeit it was just their fourth year in existence–but winning four games and setting a school-record never felt so “meh” when you realize that you could have done so much more. It’s a good feeling–that “meh” feeling that is, because when you’ve done something no other group before you has and you STILL want more–that’s a sign of maturation and hunger that every coach wants their starting quarterback to feel, and that’s something that Weeki Wachee’s Alec Cromie is feeling this offseason. 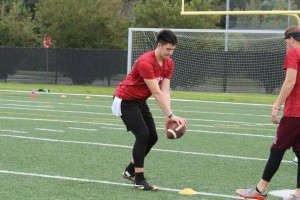 The Hornets started out 3-2 and with plenty of reasons to be excited about making a run at their first postseason appearance in their brief program history, but couldn’t see the process through to the end–losing four of their final five games to finish 4-6 and home for the playoffs. It was a learning experience to say the least of you talk to Cromie like we did and get his feelings regardless of the 2,000+ yard passing performance he totaled for his squad.

If you like your signal-callers to show progression whether it’s what they’re doing with the football in their hands or what they’re doing with their teammates in preparation off the field, then look no further than what Cromie’s done for his team the past two seasons. His sophomore season he threw for 1,346 yards, but with more interceptions (12) than touchdowns (10) in the end completing just 45-percent of his passes. In 2015, he stepped up that production big time completing 51-percent for 2,040 yards total, but this time his touchdowns (19) were all ahead of the interceptions at ten. There’s your progress on the field.

As far as off the field, Cromie knows that the progression and the numbers mean little if his teammates aren’t pulling their own weight and he’s acutely aware that he can’t be viewed as a leader of his own team if he can’t get his assignments (on the field) done to the best of his abilities to begin with. Cromie’s quick to credit his teammates and isn’t a “me first” kid by any stretch of the imagination, but he’s also fed up with the status quo.

“My first season on varsity started a little hesitant and nervous, but this year I came in more confident and it was better all-around because the chemistry with everyone else was so much better, but there were just little mistakes throughout the games this year that just cost us games. We should have done better.” said the 6-foot-4, 210-pound quarterback.

Is there a magic formula to go from “man–we were so close–jut a few plays here and there” to a situation where you’re telling yourself that you go the job done and you’re moving on to the postseason?

“I think there were some things that we could’ve controlled that we started to lack as the season went on. In the beginning we started strong and we didn’t give up and the wins started to come. But towards the end of the season players would start to slack off in practice–not everybody mind you–and there were times I felt like we could’ve done better with that self-discipline.”

So now that the time has come the information has been processed, what’s the approach to ensure that everyone’s going to learn that harsh lesson that was learned?

“For the most part, the people that are coming back know what needs to be done (this season)–the biggest part of this year will be getting to the younger guys coming up to varsity, because we have a small group coming back. Our main objective is ti get through to the young guys now what needs to be done. Having a group of ten guys are so being on the same page and the rest of the team not being on the same page isn’t going to get it done. Getting it through to the guys that this isn’t a joke–that football is a lifestyle–it’s not a game that you go out and play whenever you feel like it. So this offseason is going to be one of the most important offseason’ we’ve ever had.”

Cromie knows that the time to be more than just a leader-by-example is now. Simply trying to fight-the-good-fight through work ethic alone isn’t going to be enough. Sometimes you’ve got to speak up and challenge even if it’s not in your nature. The timetable for that isn’t easily created, though. Leaders are often born–not developed–and stepping up and telling someone that it’s time to follow is easier said than done. Understanding what you’ve got to do as a leader takes time and there’s still time for this signal-caller to get it right.

“I think maybe I should’ve stepped in and taken more control (last season), but that’s in the past and I can’t sit here and dwell on what’s in the past. It’s not going to help anything for the future. By the time I noticed that I needed to step up, it was too late.”