The Leesburg Yellow Jackets (23-6) captured their second state championship since 2011 with a narrow victory over Mariner (23-8) on Saturday, sparked by a 16-3 first quarter lead that powered them the rest of the way. The Tritons, normally a very good permitter shooting team were held to just 3-for-15 in that department, while the Yellow Jackets shot an impressive 5-for-9.

At the same time, Mariner took their game inside and outscored their opponents 28-18 in the paint. Leesburg took advantage of the 15 Triton turnovers (seven by Jahmel Myers alone) and outscored Mariner 22-9 in that category. Leesburg took a 38-21 halftime lead to then be outscored 32-19 in the final two quarters, 15-8 in the fourth alone.

Lance Ervin finished with 20 for the Yellow Jackets while Cordrayious Graham added 17. Amari Haynes had 15 points and eight rebounds for Mariner.

The Tritons were making their first trip to Lakeland since 1996, and the first under Head Coach Keeth Jones, who happens to be in his first season at the school as well.

Following the game, an ecstatic Yellow Jackets’ Head Coach Sean Campbell reflected on the win. “I just feel so blessed, that first year, we started out with one returning varsity player, and we were regional semifinalists last year so we just kept talking about getting back here.”

Jordan Wright scored 23 and Florida State signee Raiquan Gray scored 16 as the Dillard Panthers (28-4) completed a run of back-to-back state championships on Saturday. The Panthers and the Edgewater Eagles (23-9) battled through the first quarter until Dillard blew the game open with a 22-point second quarter while limiting the Eagles to three points.

Louisville commit Anfernee Simons was held to just ten points after scoring 26 against Lehigh in the semis on Thursday. The Eagles went 5-of-23 on field goals in the first half while the Panthers shot an efficient 18-of-31.

On the boards, Dillard overwhelmed the Eagles with a 47-19 advantage in that category. Gray completed a double-double with ten rebounds to add to his point totals. Dealing with other areas of the paint, the Panthers trounced the Eagles inside with 48-20 points in that area. Dillard’s bench even got in on a lot of the action, scoring 26 points on the night to Edgewater’s six.

The game was not as bleak in the paint for the Eagles as it seemed, as they swatted ten Panther shots away at the hoop.

Edgewater will return seven players from this year’s roster, minus Simons who will move to a prep school before going to Louisville. Dillard will lose the duo of Wright and Gray to graduation but they return eight players for 2017-18. With this, the Panthers will likely be in the mix this time next year.

An Orange-Osceola County border battle led to an exciting end to the state championships on Saturday as Wekiva (25-6) and Osceola (29-2) took to the court in the 9A Final. Isiah Palermo scored 15 points off the bench as the Kowboys went home happy in the final game on Saturday evening. 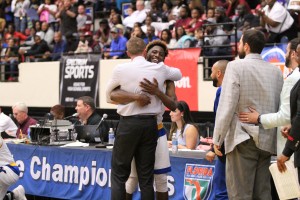 The Mustangs started off shooting quite poorly to begin the game, only going 7-of-23 through halftime, scoring 14 first half points. Osceola paced their way to a 28-14 lead before Wekiva started to come back in the third.

Wekiva outscored Osceola 19-9 in that third period, as Paul Reed scored seven third quarter points to get the crowd roaring and Wekiva within four. They would never taste the lead as the Kowboys lead wire-to-wire.

Osceola went 11-for-15 on free throws in the second half, ultimately giving them the advantage. Wekiva only shot four free throws on the game. Reed finished with 18 points and 13 rebounds, giving him the double-double.

Tevin Florent scored 17 for the Kowboys while Brady Fernandes scored 13 and was six-of-ten from field goal range.. Florent also turned the ball over five times, a third of Osceola’s turnovers. Wekiva turned those into 13 points, still not enough to win a state championship.