PROGRESS VILLAGE – 189 offensive and defensive linemen from 12 different schools representing four different counties took the field at the Larry Sports Sanders Complex for the annual Bull in the Ring OL/DL challenge on Sunday.

A different style event from the normal camp series, Bull in the Ring pitted teams of six to seven offensive and/or defensive linemen against each other in individual events, one-on-ones, tug of war, and the sled push at the end of the day. Energy was high and the playing fields were leveled as there were no skill players to shine in the agility drills. 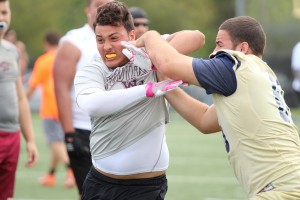 Our partners at Strong Eight Performance helped set up the event and added for a new even from last year, the hex squad, a deadlift-type event focusing on strength in the lower body. It made an even more competitive aspect on the afternoon.

OJ Augustine from Plant had his teammates behind him as he was the first on the day to complete 40 reps, but the feat would be topped three times the rest of the day. Jubruan Sanders completed 41 for Largo, while Kisean Ruth from Strawberry Crest had 47. The overall top score was from Jack Pigozzo from East Lake’s top group, who posted 50.

Pigozzo clocked the fourth best time in the sled reel-in event with a 24.49, but was defeated by a top time of 23.42 from Jay Swegheimer from Orlando Boone, who came in from across the state to participate for the second consecutive year. Ryan Armatrout clocked a 24.18 for Strawberry Crest, good for second, while Thomas O’Donnell of Countryside finished in 24.26.

In the agility tests, East Lake’s Carson Kozma finished with the best time of the day at 24.46. He was the leading scorer for the Eagles second group in individual events (East Lake sent seven different teams to Bull in the Ring on Sunday). Swegheimer was one of just three players to go sub-25 in that event, along with Plant’s Justin Lawrence.

Swegheimer finished as the second overall leading scorer in the first rotation with 161 points, just two points shy of Alonso’s Jael Feliz for the top spot. Pigozzo was third with 157.

NaQuan Baker from Boone won the bench press with 26 reps while Matthew Smith from Gaither followed close behind at 25. John Hummell (East Lake) and Chase Oliver (Wiregrass Ranch) finished tied for third with 22.

Plant took four out of the first five spots in the torpedo run, a little different from previous years. Instead of taking the weights back-and-forth as many times as possible, it was a race against time in sprinting with the weights one way, then backpedaling the other way. Bryce Love (13.17), Micah McFadden (13.45), Everett Smalley (13.52), and Garrett Murray (13.56) excelled in the new format. Clearwater’s Levis Greaves broke up the points and took third for the Tornadoes. 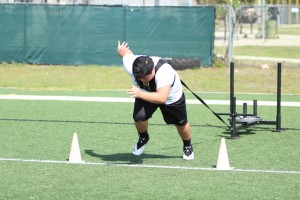 Smalley (18.76) and McFadden (18.80) finished second in third in an agility test of their own for the Panthers. In the end of it all, Orlando Boone found themselves at the top in the form of Justus Frick, who ran a blazing 18.65.

Overall, Love and Smith tied for the top spot in the second rotation, both scoring 159 points. McFadden was tied for third with 159 with Hummell.

In the third and final rotation, a pair of Clearwater Tornadoes took over. Just a couple of sophomores, Qwa-Shawn Perry (7.49) and Brandon Gary (7.51) stole the show in the sled pull, only finishing .02 away from each other. Wiregrass Ranch’s Cameron Lee fit between those two and finished second with a 7.50.

The tire flip drill was another new one for this year, and Northeast’s Jovanni Mitchell excelled in it. He bested the competition by six tenths of a second, winning the event in 23.18. Javion Engram finished second for Plant and Jeremy Redd, another Strawberry Crest Charger, finished third.

Lee grabbed first for the Bulls in the agility drill for the third group, clocking an impressive 19.50. Only Lee and Gabe Hansel from East Lake were the only two players to grab a time under 20 seconds on Sunday. Perry finished third with a time of 20.07.

Gary and Perry finished one-two in the scoring race for Clearwater in the third rotation with 161 and 151, tying with Mitchell and Michael Sarlabous from Alonso for the second spot. After the first set of events, Plant led East Lake thanks to a strong showing in the individual events.

There was a section of one-on-ones that lasted approximately 30 minutes. Plant’s Judge Culpepper came in after not participating earlier to prove very hard to beat throughout the afternoon. The D-1 commit again proved as to why he is such a sought-after prospect. Largo DE Jaqauze Sorrells came out strong in the one-on-ones after a strong showing at The Opening Regionals in Orlando a few weeks ago. The Florida signee will continue the trend of tough defensive ends for the Pack in 2017.

The battle of tug of war was a Pinellas County battle as East Lake and Largo’s top groups battled it out for the winning spot. Largo surprised a lot with a ‘ton of thickness,’ as fellow BCP staff member Don Haggard called it, and overpowered their counterparts in the 727. Wiregrass Ranch and Gaither showed out and made the semifinals. Plant’s top group lost in the quarterfinals, which would eventually hurt them in the final tallies.

The Panthers ‘Black’ squad made up ground in the overall standings by clocking the best time of the afternoon in the sled push with a 13.96, and Largo’s ‘Blue’ team made the second best time with a 14.35 pushing themselves up the standings.

At the end of the event, the consistency through the individual events tied with a solid tug of war performance and an exemplary sled time pushed East Lake’s top group to the top of the leaderboards with 1,215 points. It was the Eagles second Bull in the Ring championship since 2015. Defending champion Plant finished second with 1,142. Largo ‘Blue’’s tug-of-war championship pushed them to third with 1,060. Wiregrass Ranch ‘Maroon’ edged out Boone for fourth with 1,036.