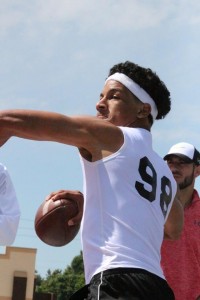 Dixie Hollins hasn’t had much to celebrate on the field the past few seasons to say the least, but the Rebels haven’t been absent producing talent that’s ready for the next level. In recent years, there’s been guys like Tryee Adams and Pro Wells that have been big-time players, but another player on the verge of continuing the streak of sending talent to college, is quarterback Chaddrick Dekovin Cann Jr. On April 25th, Cann Jr. picked up an offer from University of South Florida. He also holds offers from Ball State and Florida A&M.

Cann Jr. has been working on his skill-set since he was a true freshman whether it’s driving to Orlando for QB camps or not missing a single BCP camp since he’s been in high school. He’s bided his time after playing receiver his sophomore season and accounted for 1,553 yards passing and rushing combined. That’s good enough to have a hand in 45-percent of Dixie’s total offensive production last season.

The 6-foot-3, 195-pounder had the privilege of learning from Adams before taking full control his junior season and Adams–who put up 3,400+ yards his senior season was happy to show him the ropes. “He taught some things like getting me on the board in the coaches office and going over coverages and stuff like that,” said Cann Jr. last evening.

Although he’s on the soft-spoken side away from the field, Cann Jr. loves nothing more than the aspect of simply being “the guy”. We asked him, and without hesitation, Cann Jr. responded with: “Just leading the team. I like the aspect of leading the team and taking over a ballgame and having the coaches put the ball in my hands to win it.”

As mentioned, the hometown Bulls offered him and USF is recruiting him to play quarterback. Algebra is his favorite subject and has loved doing math his whole life, but that’s not what he plans to major in college. Although proximity to home in St. Petersburg is nice, it’s not necessarily required. If you’re a school with a Marine Biology program, then you may have him knocking down your doors in the not-so-distant future.

“It was great. I felt great about it. That’s my hometown school.” when speaking of his USF offer.  Cann Jr. added that his wish list schools contains Miami, Florida and UCF as well. But is staying close to home a priority? “Not really. I want to college to play ball, but I also want to go to a college that’s going to fit my major and set me up for my future.”

We’ve mentioned his arm strength, and his answer to the “favorite route to throw” question isn’t surprising at all. One thing he’s been working on the most this offseason, however?–“my footwork” says Cann Jr. And his favorite pass to make? “Definitely a post or a fly-route.”