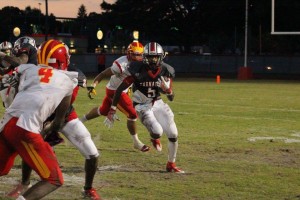 The doors are officially closed for the summer at the shop, but not before we give you some of the best cuts from Friday’s action that saw eight contests featuring teams from the coverage area. Here are some of the best numbers and performances that you might have missed!

0 – The number of points surrendered (in a half) to the back-to-back state finalists Kissimmee-Osceola by Lake Gibson in their jamboree on Friday Night. The Braves defeated the Kowboys 13-0 in that half of play, but were defeated by 8A powerhouses Apopka 28-6 in their other half of play.

41 – The number of points scored by Auburndale in their contest against Tenoroc. Last year, the Bloodhounds only reached the 40-point mark once defeating Lake Wales. They were also buoyed by a strong running game that saw Dequan Brown and Chauncy Smart combined for 27 carries and 155 yards of rushing among others plus got a very strong performance from Class of 2019 quarterback Travis Williams, who three for three touchdowns and actually had two called back.

100% – The completion percentage for East Lake’s Tyler Rupe after a 4-for-4, 100+ and 2TD night for the Eagles. Reigning 2015 Xecutives MVP for the WR’s Bryce Miller also had a big night with a touchdown catch and a pick-six.

224 – The number of yards rushing for Lakewood Ranch QB Justin Curtis. The long-framed signal-caller rushed for that amount on 21 carries teaming up with Jay Turner (17c-96yds) and Thomas Scott (7c-72yds) in the Mustangs’ 27-24 win over Booker High School from Sarasota. The three combined for 45 carries totaling 392 yards. 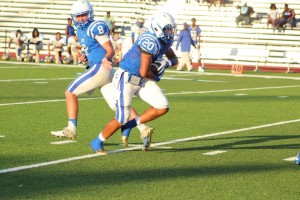 42 – The number of unanswered points scored by Manatee in their 56-17 win over Countryside. WR Tarique Milton added two touchdowns–but not the conventional way–rather, via special teams returning a kickoff and a punt for scores. Josh Booker also carried the ball for 186 yards on the evening in the victory.

4 – The number of interceptions for Clearwater Central Catholic in their tale-of-two-halves victory over Clearwater. The Marauders defeated the Tornadoes 21-14 after racing to a 21-0 lead at the half. Rashaad Stewart was good for half of those INT’s with CJ Cotman and Jervon Newton contributing with the other two. Newton also rushed for 100+ yards in the game while Clearwater’s Jacquez Jones had five receptions for 107 yards and a touchdown.

190 – The amount of yards for Hudson’s Spencer Shoun on 30 carries and a touchdown for the Cobras in their 28-21 victory of Dixie Hollins on Thursday night. Shoun was wearing Colt Exum’s #45 and was by all accounts one of the toughest players on the field even with his small frame. The Rebels also got a very strong performance from QB Chad Cann Jr., who finished 7/9-192 yards and two touchdowns. Luis Cotto was also a force on the offensive side for Dixie with 132 yards receiving.

6-for-109: Speaking of Thursday, this was the stat line for Jesuit’s Max Campbell versus Gibbs. Campbell was playing behind upperclassmen last season, but picked up 75-percent of his total receptions from 2015 and 90-percent of his total yardage output in one game against the Gladiators. (Campbell caught 8 passes for 120 in-total last season.) Malik Davis was out of the game at halftime, and had 66 yards on nine carries plus 2TD’s at the break after finishing with nine carries for 162 yards and 3TD’s in the spring vs. Gibbs last season.

516 – The number of total yards on offense for Winter Haven in their 45-18 dismantling of Forest Hill out of the West Palm Beach area. The Blue Devils had 353 yards of rushing on the evening.

As we close our doors for the summer, we want to extend a special thank you to all of the men and women who’ve served and sacrificed their lives for this very freedom to enjoy this sport–and others–so very much. We cannot possibly put into words what this day means to us, therefore we will simply say, “Thank you. And may God Bless you, and receive your sacrifices with the greatest of love and admiration. “