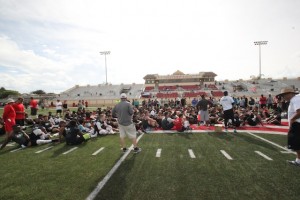 They were recognized as being the “best of the best” against the competition for that given day, now it’s time to give you the perspective that is needed as we move forward towards the spring, summer and not-so-distant beyond. The MVP’s from the E7 in Lakeland were noticed for a reason. Sure, the distinctions-earned were not easy to give. The evaluators had some pretty intense choices to make and while some positions could have been awarded three of four MVP’s, that’s just not how this works. Not everyone gets a trophy. Not everyone gets a D-1, BCS-level offer. It would be poignantly naive to consider it a done-deal that even half, much less all of these guys will end up on D-1 rosters, but that is up to the coaches and to the prospects to determine that fate. While the rhetoric can crank up faster than the heat in July following camps, combines and 7-on’s that require ZERO pads to be worn, there is value in seeing what these young men can do in these settings however. And so BCP’s breakdown of the MVP’s begins. Today we look at the guys on the offense; tomorrow we discuss the defensive side.

This rising sophomore enters the BCP radar with full-force already possessing the “magic number” height and weight at 6-foot-2, 171-pounds. While there’s plenty of reasons to be excited about what he can bring to the table, let’s start with the fact that he is JUST beginning his journey. When the pads were on last season, he appeared in just four games, going 18-for-31, throwing 3 interceptions and two touchdowns. There is also an undeniable fact called “scoreboard” that those were games in which Pasco all won, however. What Penix Jr. showed on Sunday was exactly what most college coaches want to see at this point. With three years left, a kid of his size and skill-set most staffs are simply wanting to see quality and measured progression. His footwork, release and attention to detail throughout the reps is what set him apart. Another exciting-yet-potentially enigmatic aspect to Penix Jr.’s game is that he is a southpaw. If he adds a dual-threat dimension to his game there is no telling where his ceiling ends. Although the list of Modern Era lefty QB’s advancing to the NFL doesn’t exactly read like a who’s-who, some of those names re-wrote the record books in college. For now, here’s to seeing the young gun go at it with some of the best upperclassmen this area has to offer come Xecutives time.

He’s grown half an inch and put on 10-pounds of muscle since Ignite; which is a pretty good trend since Fernandez now checks-in at a sturdy 6-foot-4 inches and 315-pounds. The interesting thing of note with this behemoth is that before he weighed-in, it looked as though he had lost a chunk of weight. That’s actually a pretty promising trend from someone that already possesses really quick feet. His ability to add weight while adding agility is always welcomed. There’s still plenty of room for this young giant to improve, but his role for the Panthers this fall will most likely separate his resume from the others in the stack. The motor and the “dawg” are there as well, but the difference between Felipe becoming a guard or staying as a tackle at the next level will boil down to his ability to keep QB Rex Culpepper’s backside off that pristine turf at Dad’s Stadium in conjunction with sealing the holes and move in space to help Plant establish balance in the running game. Since he is entering his final season and his spring and summer progresses, the offers and public courtship from big time programs are likely to be pretty intense and Fernandez will have some pretty tough decisions to make.

There are a plethora of backs that have made their way into the fold at all levels that break from the “traditional” frame of 6-2+ and 200+ pounds.  Some of the greatest of all-time such as Emmitt Smith, Barry Sanders and Frank Gore (all 5-foot-9) smash the notion that you have got be a gargantuan to tote the rock 25+ times per game to be successful. More recently guys like Ray Rice (5-8), Darren Sproles and Jaquizz Rogers (both checking-in at 5-foot-6) have shown that when you add a dual-threat dimension these frames are bothersome and downright a nuisance to defensive coordinators. Enter 5-foot-4, 187-pounds of pure medicine ball made of concrete with hands and feet attached to it. Enter, Largo’s John Clark. Although the Packers 6-5 record was not up to their standards by any means, Clark’s contributions were invaluable still. He was tied for team leader with eight touchdowns, putting up solid numbers on the ground averaging just over 70 yards a game and most importantly caught ten passes for over 100 yards. Clark’s ability to show fantastic control of that unique frame with the ball in his hands at E7 along with picking up and stopping every LB blitz correctly during 1 v 1’s make him very attractive to coaches making stops in Pinellas County this year.

This group had some absolute playmakers in attendance, so for Carlson to make his presence known in this setting is both impressive and crucial for the Crusaders in the bigger picture in general. Carlson’s frame at 6-foot-4, 205-pounds provides him an excellent foundation and with the presence of studs Tre McKitty and Nate Craig lined-up come spring and fall, Carlson’s ability to showcase a hybrid skill-set as a second TE or outside on the smaller CB’s could provide additional issues for DC’s. There will be obvious comparisons when his film is viewed to the Jordy Nelson’s, the Riley Cooper’s and Brain Hartline’s of the world. Not exactly a bad thing given the end game is to end up in the league and all three of those guys have made it to their second contracts. He doesn’t lack for genetical and intellectual makeup with his father (Jeff Carlson) being a former-NFL QB. The comparison to Cooper is particularly relevant given that Cooper’s stats his senior season at UF weren’t going to WOW you by any means. That team contained Percy Harvin and Aaron Hernandez though and that meant when the lights turned on, more-often-than-not Cooper made plays when called upon and has continued that at the highest level. Carlson possesses that same mentality and expect him to get plenty of action with Craig and McKitty (along with Devan Barrett) getting the vast majority of the attention.

Another absolutely stacked position, Barrett was clearly on the short list for MVP. Barrett’s work in the red zone versus defensive backs was almost unfair at times when not pressed at the line of scrimmage. Problem with playing press on this young man is that he now checks-in at 6-foot-2, 235 pounds, he initiates contact like a linebacker and punches out of that coverage like an elite OT. Throw in better than average route-running and speed, there’s a ton of reasons to feel that Barrett’s world is about to change significantly when it comes to his recruiting radar. The Cougars have a legit outside threat at WR, but generally hang their hats on running the ball and using play-action to break down the walls. This only adds to the intrigue and expectations for Barrett as he will be asked to show he is a multi-purpose tool on film and in front of what is expected to be weekly visits from coaching staffs across the country. The same tools he has showcased to us and what has made him worthy of earning the MVP at this position.