The barber shop has been packed for weeks with all of the dudes putting in work this season. The playmakers never stop making plays, so checkout who’s in this week giving us the best cuts from Thursday and Friday nights’ action. 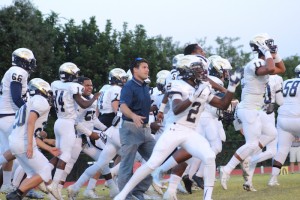 174-2: The combined scores of Jesuit, Gibbs and Bloomingdale in their games against Spoto, Dunedin and Strawberry Crest respectively.

23: The number of consecutive years that Lakeland has made the postseason following their win over rivals Kathleen

26: The number of years that had passed since Cambridge Christian Head Coach Bob Dare had won a district title until his Lancers defeated CDS on Friday.

87: The number of points that Boca Ciega has scored in their last three games. The Pirates are 2-1 in those games after starting 0-6 and scoring a total of 38 in their first six games going 0-6.

216 & 5: The number of yards and touchdowns needed for Nature Coast’s Deshawn Smith to tie Tevin Drake’s Hernando County rushing record in the Sharks’ final game at Groveland-South Lake. Smith had 6TD’s vs. Hernando last week and is averaging 271 yards and 4TD’s per game.

33: The number of touchdowns that Malik Davis (16) and Deshawn Smith (17) have combined for the last four games.

7: The number of shutouts posted by Sickles’ Defense in nine games this season following their 36-0 win vs. Freedom.

6: the number of passing TD’s by Gibbs’ DJ Johnson vs. Dunedin

5: The number of wins the last two seasons combined for Southeast–now the number of wins they have this season alone and a trip to the postseason awaits…also for the number of teams left shooting for undefeated seasons this week. They are Armwood, Braden River, Jesuit, Nature Coast and River Ridge. That number was at eleven just two weeks ago. Two teams–Clearwater Central Catholic and Cambridge Christian accomplished theirs this past Friday.

4: The number of consecutive games Hudson has won after starting the season 1-4. The Cobras have now assured their first-year Head Coach Rob Mahler at least a .500 season as they take on Crystal River in week eleven.

3: The number of different ways Zephyrhills’ Jackie Tucker scored for the Bulldogs against Anclote. One by punt return–one by receiving touchdown–and one by throwing for a touchdown.

2.6: The number of miles in yardage that Nature Coast has rushed for this season

2: For the number of teams (CCC and Cambridge) achieving their first-ever undefeated seasons.

1: For the first-ever win for Admiral Farragut over a #1-ranked team in their victory over Northside Christian. For the first-time ever in school-history that CCC and Cambridge are undefeated and for Bloomingdale’s first victory of the season.