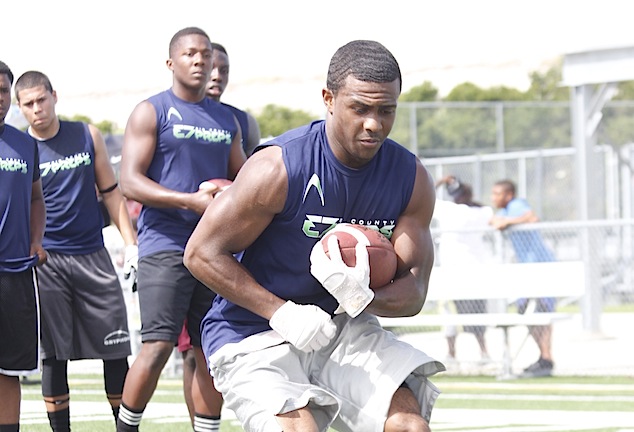 Nearly 100 players submitted hilites to us last week for evaluation. Throughout the following days, I will post players who have sparked my interest with their film from the first half of the varsity football season. Here is the second installation.

Christian Pellage, Nature Coast Tech. OT 2015 6-7/235
Fantastic player! Christian is a BCP/BHSN Ignite Showcase alum. Big upside, long arms, good foot fire and hand placement. Offers from several division 1 schools with more coming. Most impressive from his film submitted, plays with a mean streak and good pad level to be 6 foot 7 inches tall. The University of Miami, USF, Virginia, Ole Miss, Miss. State, Vanderbilt and UCF have offered Rutgers FSU, and Georgia have all been in contact and could be close.

Deshawn Smith, Nature Coast Tech. RB 2016 5-9/165
This kid has a little bit of “Adrian Peterson” to him. Not the size, not the exact speed, but definitely the balance, tough running style and vision. He is never down, feet always churning and looking to squirt out of a pile. Very elusive and explosive. Scored 3 TDs and a 2 pt conversion during win at Pasco. The 50 yd TD is Hudl’s #2 National Play of the Week and it set us up for the game-winning 2 pt conversion. Deshawn is already benching more than 295 lbs.

Jordan Griffin, Armwood ILB 2015 6-0/220
Extremely good change of direction and lateral movement. Attacks the gap and gets over trash. Impressive field sense and nose for the football. 53 tackles 3 sacks and 1 interception in 5 games.

Scott Patchan, Freedom DE 2015 6-4/230
First play of his hilite film is super impressive. Tracks down the ball carrier from the backside, for at least 30 yards and makes the tackle. Fast take off from a three-point stance and a variety of pass rush moves.

Keon Brown, East Lake CB 2014 5-11/170
Shows loose hips and good feet. I like how he transitions out of his backpedal and takes chances at the football. Not a big hitter, but not afraid of contact. Solid corner prospect. “I’m a very humble team-player and student-athlete with a 4.0 GPA, focused on carrying out the mission of the game. I’m a complete shutdown DB with outstanding run-support, coverage and mental focus while still grinding.” – Keon Brown

Demetri Royer, Clearwater Central Cath. S 2015 6-0/195
I don’t want to jump the gun just yet. However, this young man has a real shot of being a really good prospect. As a safety, he does two things really well: 1) covers ground in deep half coverage. 2) Runs the alley and gets down hill for run support. In addition to being very athletic, physical and high motor.

Anthony Hendry, Freedom OLB/RB 2015 5-8/180
Scrappy player. Plays like he has a bad attitude. Plays jailhouse football…anything goes. He is going to try and make a play by any means necessary. Love his film!!!

Aaron Cox, Freedom CB 2015 5-10/170
Kid has a chance. Plays the ball well in the air and shows good game speed. I really like how he locates the ball in the air on any ball. Pretty good reaction and very physical in run support.