Pasco County has quite a bit of buzz surrounding it for various reasons–some good–some not-so-good. Although there aren’t as many teams in it as some of the counties that border it to the immediate south–such as Hillsborough and Pinellas–things are starting to take shape and prospects/teams are starting to show their worth.

The emergence of Mitchell running back Mychael Hamilton to an already well-built offense featuring Larry DallaBetta and JJ Lewis among others, it was no surprise to find the Mustangs leading the charge on the chart that was created—(For more, please visit pascocountyFB.com to see the entire list)–Mitchell won their first district championship in school history and their rivalry games with River Ridge and Sunlake are well-past must-see football.

The Mustangs feature quite a bit of talent returning on their roster for 2016, and their chances of back-to-back titles are solid, but the Seahawks of Sunlake have plenty of talent returning along with some underclassmen that are going to make names for themselves this fall. Both schools have games that should go in their favor this spring, and it’s safe to say that most of us will be counting the days until the two meet for what should be a district championship on the line in October. Mitchell’s title last season now leaves Bishop McLaughlin, Gulf, Fivay Zephyrhills Christian and Ridgewood as the only schools that have yet to win a title in Pasco County.

Speaking of Bishop McLaughlin, they were on the receiving end of quite a few transfers from Land O’Lakes–most notably LB Marc Herrera, but that doesn’t leave the Gators without playmakers. Land O’Lakes will get the benefit of playing six home games this season and will have a chance to erase the bad taste in their mouth immediately when they face Gulf in the spring. Gulf is under the direction of first year head coach Matt Kitchel and was winless last season after having one of their best seasons’ in school history in 2014.

Ridgewood enjoyed the services of Glass Wilson V last season, but the main weapon for the Rams is off to play his ball at Presbyterian this fall and Coach Jay Fulmer will be looking for any-and-all takers for the spot that has been vacated. Last season’s 5-5 record was the Rams’ best since 2007. You can point to Anclote‘s Braxton Johnson as the reason for the Sharks’ erasing an 0-10 season in ’14 to finish at 4-6. Gone is Head Coach Matt Wicks, who is now Pasco County’s Athletic Director. Enter Matt Kinglsey, who served as defensive coordinator at Anclote last season.

Sunlake still averaged 28.6 points per game last season–up 2.8 points from 25.8 while River Ridge and Zephyrhills were up in their production in terms of points. The Royal Knights were already averaging 30.7 game in 2014 and picked up an additional point-and-a-half to average just over 32-per game and the Bulldogs averaged nearly 41-points per contest which was nearly a two-and-a-half point uptick from their 2014 campaign when they averaged 38.5 points. 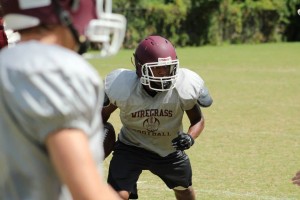 That said, River Ridge will have to replace the nearly-irreplaceable in all phases Chris Schwarz while Zephyrhills will sort out their offensive approach without Antwione Simms and his 1,804 yards from last season due to a knee injury. Simms should return during the season at some point, but there’s no guarantee when at the moment. The Royal Knights and their staff aren’t dwelling in the past and will look to continue their signature-style of ground-and-pound offense and stingy defense that has helped them reach elite status in the county the past few years. Zephyrhills is also welcoming their new Head Coach, Nick Carroll–who is a ZHS Alumnus and was at Sunlake last season where he coached DB’s, WR’s and special teams.

Wiregrass Ranch wants nothing-to-do with 2015, and we don’t blame them. The Bulls suffered through nineteen season-ending injuries that encompassed everyone but the hydration specialists and equipment mangers. A healthy Wiregrass on paper is one of the most-athletic rosters in Pasco, but that doesn’t amount to much until they start proving it o the field. Their game with Pasco last spring was a shootout and gave us plenty of talking points, so it’s not out of the question to see the Bulls hit their win-total from last season (2) in the first two weeks of the season–barring injury of course. Wiregrass’ neighbors–Wesley Chapel–are also coming off a 2-win season, but will at least have their starting QB Jacob Thomas returning along with new HC Antony Egan, who makes his way over from River Ridge.

Speaking of Pasco, they’ve got some work to do in order to find a starting quarterback now that Michael Penix Jr is down at Tampa Bay Tech. You would have to go all the way back to 2006 when the Pirates under .500 and they had compiled a 76-20 record under Tom McHugh before their 4-6 campaign in 2015. The Pirates have missed the postseason for two consecutive seasons after reaching them seven consecutive years under McHugh to start. Hudson‘s Robert Mahler starts his second season with the Cobras and there’s excitement all-over-the-place with some of their highest numbers to date showing up for spring ball while down the road at Fivay, the Falcons will start with a new head coach, but in search of a quarterback. Someone that doesn’t need a QB is Academy at the Lakes and their starter Chris Butash and Zephyrhills Christian Academy will once again have a very-talented player by the name of Mykhael Chavis in their second season as a program playing at the linebacker position mainly, but also as a bruising running back for the Warriors.