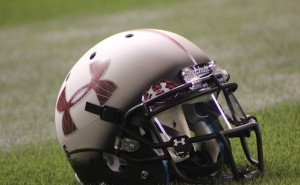 While Under Armour is traveling across the nation on their national tour highlighting the country’s top senior high school football players selected to participate in the 2013 Under Armour All-America Game, Armwood senior Leon McQuay is preparing for his breakout party. Not on the field (Selected as an Under Armour All American), but in your ears.

The sixth-annual Under Armour All-America Game presented by American Family Insurance is slated for 5 p.m. ET on Jan. 4, 2013, at Tropicana Field in St. Petersburg, Fla., and will be televised on ESPN. If all goes well, ‘I Will’ a track composed by Leon McQuay III, published by Jeremy Writt and lyrics by Infinite Skillz will be the used within the following ESPN Programming: 2012 Recruiter Nation, 2012 Under Armour Selection Show & 2012 Under Armour All American Game.

Everything is not settled, but the ball is moving and in a positive direction. It is not a secret that McQuay is a avid music fan and is knee deep in “Dropping beats”. This could be the first time the world hears his talent instead of seeing it on the field. McQuay is scheduled to make his college selection during the Under Armour Game.