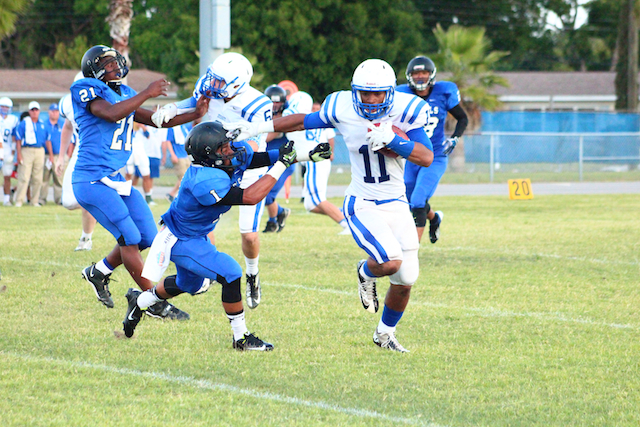 Let’s keep this in perspective; It was a spring game, a glorified practice if you will. However, the scoreboard was running and two opposing teams lined up across from each other; All that to say, one team had to win and one team had to lose.

Jesuit displayed a dominant performance, defeating Dixie Hollins 55-19 on a beautiful Monday night at the home of the Rebels. Several good observations from the night. Below are a few to carry into the summer months.

1. 2015 Jesuit RB, Kevin Newman turned the lights off last night. If you didn’t know who he was prior to his performance last night, you made sure someone else knew once you left the stadium. Newman showed speed, footwork, toughness and tackle breaking ability. I am not sure how many yards he rushed for, but it was plenty. Add four first half rushing touchdowns and there you have your player of the game.

2. Not to be out done, Trent Wessel, Jesuit’s 2015 QB played as expected. The Tiger QB really caught on midway through the second quarter when the offensive staff let him rip it. Constructed several scoring drives and showed big time leadership.

3. Dixie Hollins has a QB of their own. Tyrie Adams was pretty good last night for the Rebels. The rising senior picked up where he left off last season (2500 yards passing) connecting with his favorite target Davontae Harrington who made some big time receptions and kept Dixie alive. Jesuit had some trouble containing Harrington. But 10 teams had the same problem last season.

5. The most exciting part about the 2014 Jesuit team…Youth. Dixie exposed some holes in the Tiger defense because of inexperience and youth. On the other hand, the young players will develop and become more experienced and with their size and talent, they could be very good late in the 2014 season. Freshmen and sophomores are abundant on the defense, especially the defensive line and sprinkled in the LB group. It will be exciting to watch this defense grow and mature.