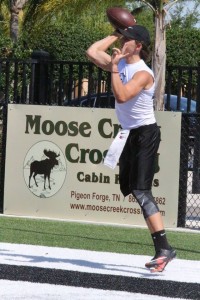 One of our favorite aspects of offseason camps is going back and checking the tape. As “they” say, the eye-in-the-sky doesn’t lie–so we decided to do just that and see if our eyes weren’t fooling us with regards to the nine MVP’s from the E7TC event in Lakeland. We look at tons of film, so we knew what these young men had to offer (even if the highlights were limited) coming into the event. We looked at their previous seasons’ film, then looked at their performances at camp and took into account the coaches in those stations said about them while they were in action at the event.

Once that was wrapped up, we came up with quick confirmation as to why these young men were deserving of bringing home the MVP honors. Needless to say, we were very pleased with the nine prospects that brought home the goods and here are some of the thoughts we had on them following the entire breakdown process. We start with their quick assessments from the first article then give you exactly what their film showed plus we give you a little bit of extra info in terms of how they may specifically impact their squad overall with spring just around the corner and fall here before we know it. Up first, is Clearwater Central Catholic’s Jakob Parks.

WHAT WAS SAID:
“QB – Jakob Parks (Clearwater Central Catholic) – Class of 2017
Parks is the first of two members of CCC to bring home an award on the day. Parks is coming off a season in which he threw for 2,056 yards, 20 TD’s and 3 int’s for the Marauders, and his performance throughout the day was consistent in terms of accuracy, strength and decision-making. Parks’ assessment of the action today–“Just having fun throwing the ball–doing what I love.”

WHAT THE ‘EYE IN THE SKY’ SAID:
At E7TC, Parks backed up what we saw on his junior film. The 6-4/200-pounder is really mobile possesses above average arm strength and is super accurate. We feel like going to be in the conversation for top three QB’s in Pinellas County and could show he’s one of the top QB’s in the entire coverage area by seasons’ end.

THE IMPACT:
Following in the footsteps of Jeff Smith, Parks is already on the heels of eclipsing Smith’s impressive passing numbers as long as he stays healthy. Smith finished his CCC career with 3,625 yards passing and was good for 3,531 yards as the full-time starter his final two seasons. Parks threw for 2,056 yards in 2015 which puts him just 1,476 yards behind Smith to top that two-year average and 1,453 yards from topping Smith’s overall passing numbers.

We say all of that to say this–the numbers won’t matter unless the Marauders make it to Daytona Beach to play for a state title. Parks isn’t going to be the sole reason why CCC gets there, if he is–then that’s just icing on the cake at this point, but he certainly has the ability to lead CCC to the promised-land with the pieces in place surrounding him. The Marauders may be one of the most complete teams in the area, but he is going to be the catalyst on offense for certain.  Parks has the moxie and a presence that you look for from the position that gives you the kind of confidence he accepts that role and is going to succeed at it.