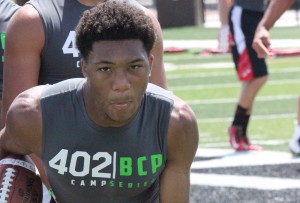 Tampa Catholic’s Devan Barrett announced this evening that he will continue his football career at Auburn University. This is big news for the War Eagles, who will finally get the running back they are looking for in their 2017 recruiting class. Barrett will be the 13th hard commit for Auburn’s ’17 class, according to 247Sports.com. Barrett will also be the seventh four-star prospect to commit to the team this year. He announced his commitment on Bright House Sports Network. “It just felt more like home. Everyone there just made me feel like I was already on the team and just watching them practice the coaches do a great job coaching” said Barrett. When asked about how important playing in the SEC was, “Doesn’t really play a big factor. All I know is it’s a big boy league and every week you play a big game and so I have to prepare myself with my teammates for those game.”

According to 247, Auburn’s current recruiting class is 13th in the country and sixth in the SEC. Barrett’s commitment may very well change that opinion. The Tigers will be getting a player who ran for 1,891 yards in 2015 and scored 21 rushing touchdowns for the Crusaders. The amount of talent Barrett has is remarkable to see, and he can play a few different positions if the Tigers feel it’s needed.

In his freshman and sophomore years, Barrett also played a good amount of time on the Tampa Catholic basketball team, before dropping it and focusing on football. His athleticism is through the roof and his upside at the college level is something unseen in other prospects. At 6’1″, 195 lbs., Barrett can fit as a running back (his most natural position), cornerback, and even safety. Some even wonder that if he grew just a tad more, could he fit in as an outside linebacker? It’s debatable, but the Tigers really seem to like him in the backfield.

This certainly isn’t the first time that Auburn has recruited heavily in the Tampa Bay area, it’s been a pretty common theme over the past decade or so. Most recently is Barrett’s teammate Nate Craig-Myers, one of the most sought-out prospects in the country, who signed to the Tigers on NSD. Following Craig-Myers was his brother, Jayvaughn, out of Pasco High. Out of Armwood High came Byron Cowart in 2015, who was the number one defensive end in the Class of 2015. Brandon Fulse out of Fort Meade went to Auburn in 2011, Lakewood WR Ryan Davis in 2015, Dontae Aycock of Chamberlain in 2009. “They [Auburn coaching staff] came after me hard. I texted coach Horton everyday and so I feel like if a coach takes time out of their day to text or call you then you must be something special to them. I’m going to take all my officials just to see what’s left out there for me and I mean I have a few in mind but nothing written down yet.”

Barrett will add a great playmaking ability to the Tigers as they try to find the top of the SEC and the AP Top 25 Polls by the end of the season, as they did in the Cam Newton days. After today, his focus switches from Auburn back to helping the stocked Tampa Catholic team to win a State Championship.