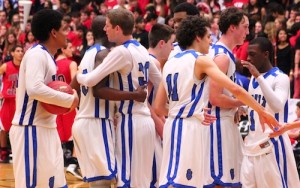 Jesuit faced a Bishop Kenny team that was not going to go down without a fight. Jesuit uncharacteristically had a slew of turnovers which allowed Kenny to hang in the game and at times build some much needed momentum.

At the end of the first half, the Tigers led by 10 points and pretty much controlled the flow of the game. Joey Galvis played huge in the first half and carried over into the second half finishing with 16 total points; 6 of 10 from the field and 4 of 7 from 3 point land.

Jack Fleming struggled. Could not find the rim as we are accustomed to watching. He was 2 for 11 from deep. Ending the game with just 6 points. Kenny’s Brennan Sullivan and Christian Carlyle both had a solid showing. Sullivan made a few timely 3 point field goals to ignite the stands, while Carlyle ended with 11 scrappy points to keep Kenny within striking distance.

When the game was on the line, the Tigers did not fold. They used the same method to survive this scare as they had been winning all year long. DEFENSE! Jesuit kept the heat on in the final minutes of the game to create a late game turnover to preserve the win. Devin Harris finished with 15 points and 7 key rebounds. Travis Johnson had a quiet 6 points.

The Tigers will face American Heritage tomorrow (Saturday) at 10am for the 5A state title.