“We’ve had State [Title] on our mind, not just striving for a 14-win season- they know what it takes to get there and go beyond, fortunately, we were able to get past that hump this year…” ~ Offensive Line Coach Caleb Pickrell, Lakeland Dreadnaughts.

Fort Lauderdale, December 6, 2018- As the prominent saying goes, history repeats itself, and after a decade, these two teams find themselves face-to-face in what looks to be a nail-biting class 7A State final. If this matchup doesn’t get your HSFB blood pumping I’m not sure what will- let’s compare and pay some attention to a few quotes from a vital part of Lakeland’s staff, O-line Coach Caleb Pickrell.

“We’ve just tried to keep doing the consistent thing verse every opponent, that’s key, and treated every team likes it’s the best one we’ve played all year. Got to stay physically and mentally prepared. I think the overall strength has been the defense, they’ve had a phenomenal season, most points we gave up all regular season was to Apopka (20 points). The guys up front on D have maintained a constant pressure getting to QB’s; the D-line hasn’t gotten enough credit.”

“They’ve really affected the offensive backfield this year- 2nd and 15 is hard to plan for. Obviously, Demarkcus Bowman has had a great year, along with our O-line blocking great out in front, he doesn’t need a lot of space to cause damage so our run game as well for sure, but to highlight anything, I’d say the defense as a whole has just done an outstanding job,” O-line Coach Caleb Pickrell states emphatically.

St. Thomas Aquinas lands the 8th spot on MaxPreps’ Xcellent Top 25, Lakeland nowhere to be found in the top 30. The Navy and Gold also come in at 13th on MaxPreps’ nation High School Football Rankings. The Dreadnaughts holds down the 44th position within the nation’s High School Football rankings, rated 63.8 overall, with a 27.6 schedule strength rating. Aquinas attained a 73.0 overall rating, with a notable strength of schedule at 35.0.

“Their (St. Thomas) consistency on their roster as far as skill and athletic ability; they have better depth than most teams, so we have to try and win off the line of scrimmage. We just have to play Lakeland football and produce turnovers on the defensive side. As an offense, we need to establish our run game- just going to be ready for four full quarters of football.” Coach Pickrell’s response in regards to any standout preparation.

“I think it’s the program in itself, nothing new to the program; always had talented athletes surrounding us, so keep preparing mentally and physically in the offseason and regular season and the recruiting process will take care of itself- consistency is key, remember. These guys have been ready since the jump and that shows, so top collegiate programs have trusted our process,” Coach Pickrell when asked about D1 college attention around the program recently. 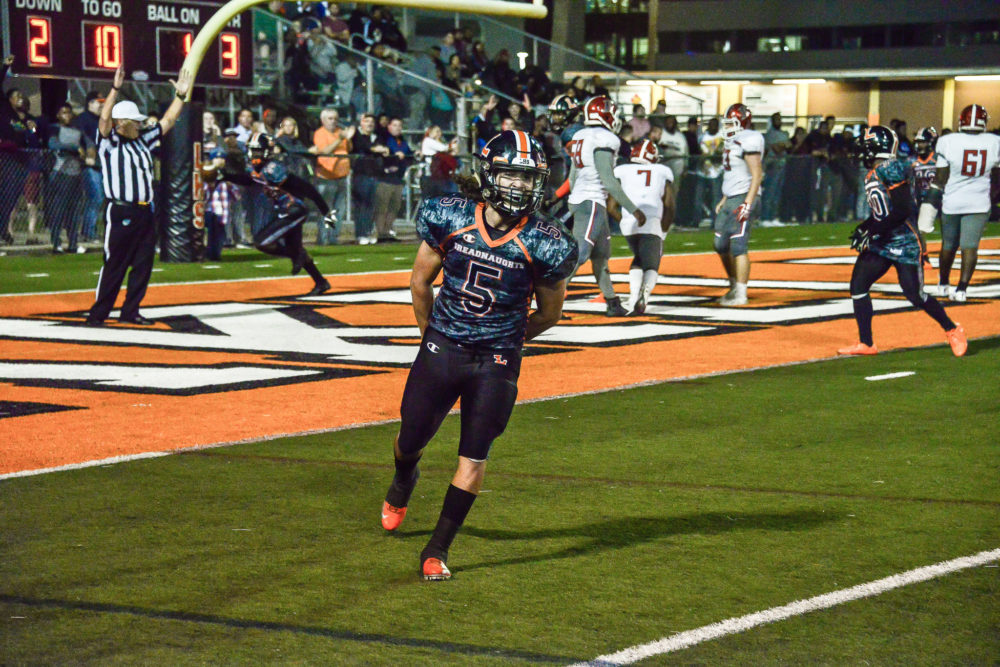 Among the Florida Class 7A rankings, both of these programs are neck and neck as top-tier Alphas; as 13-1 overall St. Thomas Aquinas is top dawg in 1st place of 87 teams, 14-0 Lakeland a close second retaining the 2nd spot. The Orange and Black is 1st of 4 teams and are 3-0 in their respected district 7 standings, ranking 6th in the sunshine state. Aquinas is in 1st of 3 teams, at 2-0 in their district 14 standings, with an impressive rank of 2nd statewide.

Coach Pickrell concludes, “Being a Dreadnaught means a lot to me, I’m an Alumni- I was the starting center my senior year in 2008 (named FHSAA 5A All-State Center!). After we won the Title in 04’, 05’, 06’, losing to them my senior year we were 14-0 going into that St. Thomas Aquinas matchup, so its special to me that 10 years later we get the opportunity to meet again. The State Championship is always where we set our goal at; to reach it is an accomplishment in its self, so we’re trying to get another one for the school and Head Coach Bill Castle.”