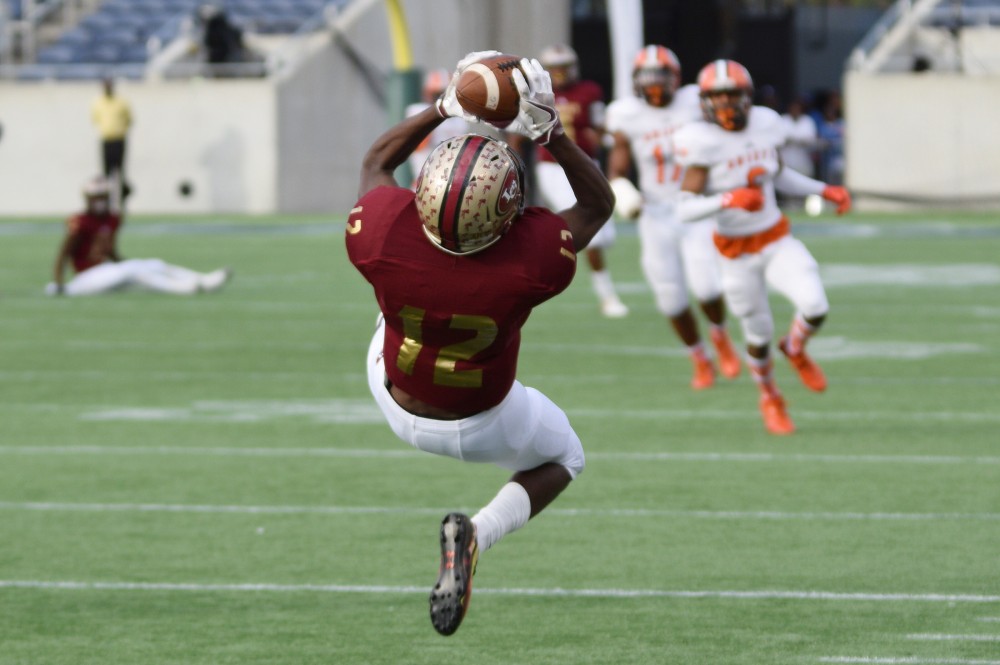 The 2016 high school football season; A year that many of us will always remember; A year that many of us soon cannot wait to forget. In other words, it was a pretty good year. Sure, you could have dwelled on the countless cancellations from Mother Nature if you wanted, but you could have also pointed to the chaos (in a good way) that was created by big brand-name teams getting knocked off their perch. You could have stood and fought on the hill with those that felt change was not necessary to the upcoming postseason for 2017, but you would have (unfortunately, yet purely metaphorically in this instance) died on that hill as change–in a big way–came from Gainesville.

You could have felt a myriad of emotions with regards to this season–good or bad in origin–and you would have been wholly justified in your feelings. Whether we want to admit it or not, if grades were assigned to feelings, give us an ‘A’ or an ‘F’—do NOT give us a ‘C’. This season gave us so many reasons to feel as though we were passing with flying colors and yet so many reasons to feel like it was time to head straight to the academic offices and apply for grade forgiveness without even waiting for the teacher to post the final scores. That is what we call a full scale of emotion. That range is what we want to feel (for better or worse) when we are watching these young men apply what has been taught. With that, we thank each and everyone of the players, the coaches, the fans, the marching bands, the cheerleaders–and everyone else we forgot—for giving up your most precious resource, your time.

Although it would be comprehensively satisfying to comb through all 110+ teams in the area and provide a highlight, time is of the essence. Quite frankly, there are some programs with trends that are more naughty, than nice. It’s Christmas, and in that spirit, it’s best to keep it to as much “nice” as possible. There are some teams, coaches, and players that have provided us with a little bit of production–and history–that deserve some attention however. So without further ado, it is the 2016 season in its perspective.

There were some “upsets” during the preseason, but logically-speaking, it was preseason. Plus the first week of the season is usually a mixture of “surprising” results incorporated with scores that make you say, “they are who we thought they were” in a *VERY* Dennis Green voice. Nothing to see here, right? Then October 7th happened. Hurricane Hermine happened. In season’s past, and for this season, mass cancellations haven’t (really) effected the outcomes, but with the approved changes to the playoff format putting the emphasis on total points accrued via scheduling, missed games will have to be a thing-of-the-past.

Hurricane Hermine’s havoc caused us to miss some marquee games that second week of the season. For instance, Victory Christian at Berkeley Prep. Or perhaps Plant at Hillsborough. What about Clearwater at Countryside? Yeah, we missed that one. Don’t forget about Lake Gibson at Winter Haven and Pinellas Parl at Northeast, either. All-in-all, 67 of the 110 teams in Hernando, Hillsborough, Manatee, Pasco, Pinellas, and Polk Counties–or 61% of the entire region–had to cancel a game this season. Ten of those programs had to cancel at least two of their games–never to be made up. Oh, what could have been?

As the season progressed, teams and districts began to take shape. There were some upsets along the way, but in many cases, this season was about regressing to the mean, or the average. Certain teams inevitably benefitted from, or fell victims to—the cycle of talent that replenishes or diminishes itself after four seasons. We began to see that

teams like Wesley Chapel, Lake Gibson, Clearwater, and Wiregrass Ranch were all on pace to do something very special. Once we got to the postseason, three of those four teams were still alive, while one of them had completed one of the biggest turnarounds in the entire state.

There were casualties during the like midseason coaching changes at Gaither, while it was deemed that Sickles was to forfeit all of the wins on their schedule to that point of the season. Lake Gibson and Plant became our representatives in Orlando, while Northside Christian, Victory Christian, Berkeley Prep, and Jesuit all got to within four quarters of joining them. In the end, there were two champions in fact. Saint Stephen’s Episcopal won the Sunshine State Athletic Conference in an instant-classic over Saint Edward’s from Vero Beach and Winter Haven’s All Saints’ Academy won their FCS division title within the SSAC.

Jesuit’s Matt Thompson just completed his first four-year cycle at the helm, and the numbers are impressive. Thompson and his Tigers went 12-1 this season and finished in the Class 5A State Semis. That completes a four-year campaign of 42-11 for the former Defensive Coordinator at Armwood. If he can keep up this pace, you can write his name in stone as one of the greats this county has ever produced at the coaching position. That’s obviously projecting a very long way ahead, but comparatively speaking, these first four years stack against some of the other greats in the area very well.

For instance Earl Garcia’s first four seasons at Hillsborough from 1993-96, the Terriers were 41-7 and were state finalists one season. Robert Weiner went 38-12 his first four at Plant and won a state title. Tommy Lewis has quietly gone 40-13 his first four seasons at Victory Christian Academy with a state title to his credit. Obviously, all that’s missing is a ring or at the very least a finals appearance in this comparison; something that Thompson and Jesuit are certainly going to continue to get looks at sooner, rather than later.

Interesting of note, Armwood’s Sean Callahan’s first four seasons at Armwood from 1990- 93 weren’t as dominant. Callahan was 14-26 his first four seasons in Seffner, but you know why it’s all good? His seniors just completed a 52-5 run following this season. Although the Hawks seemingly gauge their season on whether or not they’ve won a ring, they can take solace in the fact they’ve completed a run that can only be compared to Plant’s four year stretch of 53-6 from 2008-11. Three of Armwood’s five losses came to one team during this run came to Miami Central–all of which in the state finals–while the others coming this season to Plant in the regular season and Lake Gibson in the second round of the playoffs.

Rashad West had his Southeast Seminoles in the postseason for the second consecutive time following John Warren’s job in 2015. Although the ‘Noles were one of the handful of teams to make the playoffs with a losing record, they made the playoffs nonetheless. This is significant because it begins another streak for one of Manatee’s bellwether programs. While they’ve missed the playoffs three times since 2011, they’ve only missed the postseason four other times since 1983 for a total of 27 appearances in 34 years. While the ‘Noles may have had one coach for over three decades, they’ve had two coaches in the last three years, yet the standard of getting to the big dance has still been met.

Durant under the direction of Mike Gottman reached the 8-wins or better mark (8-3) for just the fourth time in the 22-year history of the program. Another team that experienced a

standout season was Berkeley Prep under the guidance of Head Coach Dominick Ciao. The Bucs won 7-straight after a 2-2 start and finished as the Class 3A Region-2 Champions. That was the 5th region championship for the program and their second this decade following a 25-year drought in-between banners from 1985-2011. This season also completed Ciao’s tenth season at Berkeley Prep. During his tenure, the Bucs have been .500 or better all ten years and have just completed their ninth consecutive winning season.