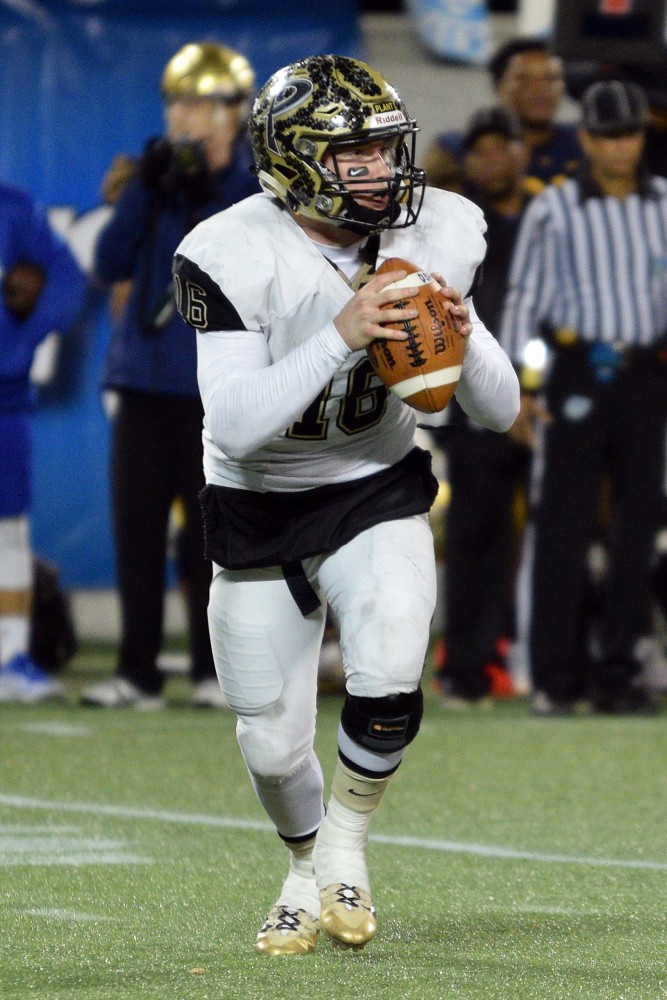 On a sunny Sunday afternoon last March, Dane Frantzen broke a sweat while catching footballs from his coach, Robert Weiner. They were at Bull in the Ring, BCP’s annual linemen challenge, where his Panthers took the trophy. The event was in an intermission while scores were being tallied, for Frantzen, a time to work on his craft. He threw balls back to Weiner, his coach critiquing and praising him for what he did right and wrong on each throw. Weiner had the whole system in his head, what he wanted to do in 2016, amid all of the questions the media threw at him. Would the next Plant starter be Frantzen? Or would it be Kyle Trina? Fast forward to the 9 Route 7-on-7 tournament in July. Frantzen took the majority of the snaps in that tournament, Trina taking snaps whenever Frantzen called for a rest. We didn’t just see a starting quarterback in those games, but we saw a leader, one hungry for not only the starting spot, but for more. A lot more. Plant posted videos of Frantzen working long hours of routes with his wide receivers on MaxPreps, giving the rest of the world some insight. He got the job.

Frantzen’s natural position is running back. That’s evident in the 1,323 yards and 18 touchdowns he picked up on the ground in 2016 (not including his totals against Robert E. Lee and St. Thomas Aquinas in the last two games). Frantzen is 5’11”. Maybe even 5’9” without cleats. He’s not your prototypical quarterback. Frantzen didn’t have the height of Robert Marve, Aaron Murray, and a few of the other Plant great quarterbacks. He doesn’t need it. Frantzen accounted for two-thirds of Plant’s total offense in 2016. His 2,109 passing yards were the most by a Plant quarterback since Colby Brown in 2013. He scored the only Panther points in the Class 7A Final against St. Thomas Aquinas earlier this month. Frantzen’s 28:5 touchdown to interception ratio was one of the best in the area. Frantzen was one of only three quarterbacks in the state to eclipse the 2,000-plus passing/1,000-plus rushing mark. He is the poster-boy of Plant football, the one that watched Marve, Murray, Brown, Rex Culpepper and others, learned from them, and then when it was his turn, set an example for future generations to admire and learn from.

They say that lightning never strikes the same place twice. Whoever said that didn’t know Malik Davis. The Tiger was in fact, lightning: quick, physical, impossible to contain. Davis struck the end zone 33 times in 2016, which was a career high, along with his 2,469 yards, putting him fourth in the state. He finished his career as the only Hillsborough County running back to compile more than 7,000 yards. The Florida commit rushed for 11.5 yards per carry this season. The one time he rushed for less than 100 yards in 2016 occurred when the Tigers met Middleton, where Davis was held to 87 yards. Jesuit won 42-0, either way. There was that game when Jesuit hosted Gibbs in the first round of the playoffs and Davis ran the ball five times which resulted in 188 yards. The next week, he ran for a season-high 279 against Jefferson, including one for 91 yards. Even against eventual 5A Champion American Heritage, Davis ran for 144 yards on 26 carries. Topping it all off, Davis finally overcame Ray Ray McCloud’s All-Time Leading Rusher award in Hillsborough County with his work in 2016.

Going into the season, a lot of teams and players claimed they had the team to make a deep run in the playoffs. Lake Gibson knew they had a special team, one to watch for. The hallmark of that team was their defense. In the center of it all: AJ Deshazor. His stats are quite good: 114 tackles (53 solo), .5 sacks, five TFL, and an interception, but they only tell half of the story. Deshazor’s intangibles tell the other half. It could be because his father coaches at the school, however, his football IQ is that of a college linebacker. He quietly waits for the play to develop before he moves, diagnoses the play, makes adjustments at the line of scrimmage, the total package is there. Deshazor put it all together at the right time to help his Braves reach their first title game since 2004. His ability to be a focal point defensively and in the locker room set him apart from the rest of the competition.

Noah Ruggles has one of the strongest legs you will ever see from a specialist. The Warrior is ranked fifth in the country by Kohl’s Kicking, and holds a single offer from Vanderbilt. Steinbrenner’s season wasn’t as successful as what it was in 2015 with four less wins, however, Ruggles’ consistency was one of the highlights of their year. Ruggles knocked off a 56 and 57-yard field goal against Palm Harbor University in early October, which was the longest in the state this season. He was 9-for-12 on field goals, with his long of 57. Ruggles was perfect on PATs, 21-for-21. In the punt game, he averaged 36.6 yards per punt, a long of 54, and pinned the opposing team inside the 20 eight times in 2016. To finish off his high school career, he took the Hillsborough County All-Star Offensive MVP for the West, scoring the only points for the West Side in the 9-6 loss.

Expectations were very high for the first-year coach – all of which he eventually exceeded. Doug DeMyer stepped in for his father, Keith, who had coached the team to their previous (and to that point only) state title game appearances in 2003 and 2004. Doug kept the DeMyer name strong and proud through an incredible 13-1 record, only losing to Carol City in the 6A Final. He was named the 6A Coach of the Year by the Florida Dairy Farmers for his achievements in his first season. During warmup and postgame, DeMyer is one of the most calm and peaceful people the world has to offer. However, he’s got a fire in his heart when he’s coaching a football game. DeMyer led a defensive unit that pitched four shutouts on the year, and only allowed opponents to score nine points per game.